Mines Action Canada remains concerned about the national legislation used to implement the Convention on Cluster Munitions.  The two and a half year long process to pass this legislation is indicative of the importance of the Convention and the widespread concern about loopholes in the legislation known as Bill C-6.  During the legislative process, Bill C-6 received intense national and international attention including commentary from the International Committee of the Red Cross, from diplomats, from international organizations, from humanitarian experts and from civil society organizations.  Mines Action Canada was pleased to see the House of Commons make an amendment to the legislation in 2013.

“Although Bill C-6 contained numerous loopholes when it was passed; it is clear that Canadians will not use cluster munitions. The debate about the legislation has ensured that the small number of Canadian allies who remain outside the Convention will not likely be putting Canadian personnel in the difficult position of assisting with the use of this banned and internationally condemned weapon,” said Paul Hannon, Executive Director. “Senator Fortin-Duplessis’ statement that ‘Canadian commanders will never have the right to order the use of cluster munitions’ even during joint military operations is a positive step and we look forward to clear directives from the Chief of Defense Staff.”

The thorough review of the legislation included clarification from the government that Bill C-6 and Canada’s ratification of the Convention on Cluster Munitions bans the investment in cluster munition production.  Department of Justice officials stated that Canadian investment in cluster munition producers is in fact considered aiding in their production and is illegal - “[i]f there's investment in Canada in a company offshore that amounts to aiding and abetting, then it will be subject to the Canadian criminal law under the bill.”

Canada has been complying with some of obligations under the Convention on Cluster Munitions prior to ratification.  In June 2014, all of Canada’s remaining cluster munition stockpiles were destroyed well in advance of the 8 years after ratification deadline contained in the Convention.  Canada has also been submitting voluntary reports to the States Parties annually.

As a full State Party to the Convention on Cluster Munitions, the Government of Canada is obligated to help clear contaminated land and assist the victims of this horrific weapon.   Mines Action Canada is calling on the government to resume its position of a top five donor to mine action by contributing at least $1 per Canadian per year.  Canadian funding can save lives and ensure that Canadian tourists, businesspeople and aid workers can walk without fear everywhere.

Amidst reports of cluster munition use in Syria, Ukraine and Libya, Canada’s ratification strengthens the stigma against these inhuman weapons.  Mr. Hannon further said “We expect Canada to discourage our allies from using cluster munitions and to encourage all countries to join the treaty.”

For more information or to schedule an interview, contact:

A cluster munition (or cluster bomb) is a weapon containing multiple - often hundreds - of small explosive submunitions or bomblets. Cluster munitions are dropped from the air or fired from the ground and designed to break open in mid-air, releasing the submunitions over an area that can be the size of several football fields. They cannot discriminate between civilians and soldiers. Many of the submunitions fail to explode on impact and remain a threat to lives and livelihoods for decades after a conflict.

116 countries have joined the Convention on Cluster Munitions (89 full States Parties - in bold):

About Mines Action Canada (MAC)
Formed in 1994 Mines Action Canada (MAC) is a coalition of Canadian non-governmental organizations concerned with the human and socio-economic impacts of landmines, cluster munitions and other weapons causing similar humanitarian impacts. It is the Canadian partner of the International Campaign to Ban Landmines (ICBL), the 1997 co-recipient of the Nobel Peace Prize and is a founding member of the Cluster Munition Coalition. www.minesactioncanada.org

Campaigners from around the world ask Canada to #fixthebill

As Bill C-6 implementing the global ban on cluster munitions is being studied by the Foreign Affairs Standing Committee, campaigners from around the world are seriously concerned because the legislation allows Canadians to help use and request that other countries use a banned weapon.  They have a message for Canada - #fixthebill!

A video message from Lynn in the USA:

Nora from the USA: 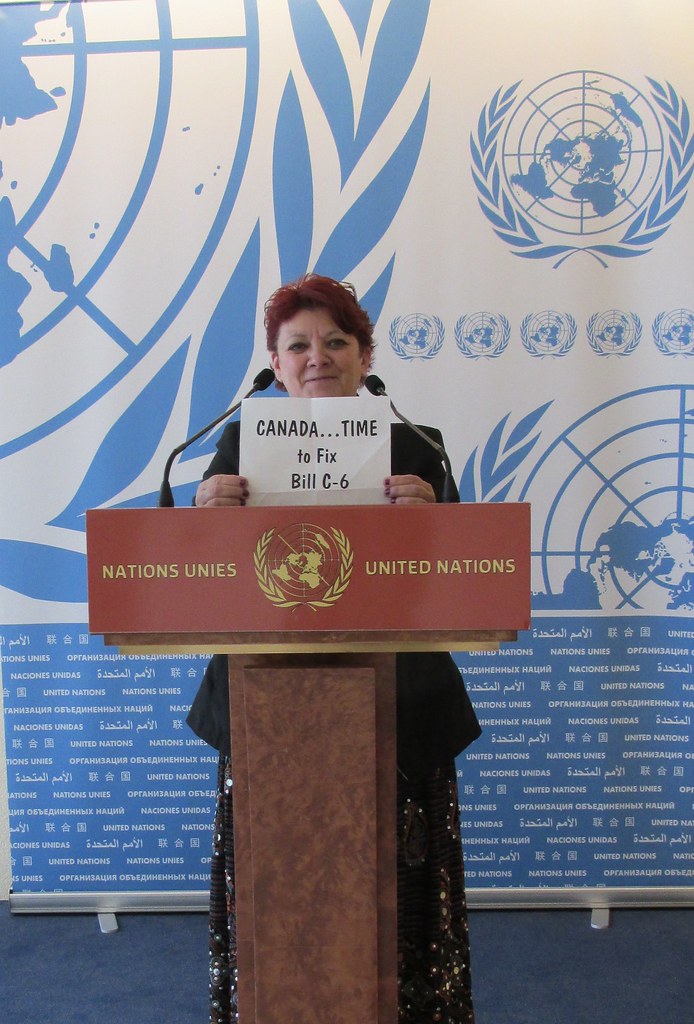 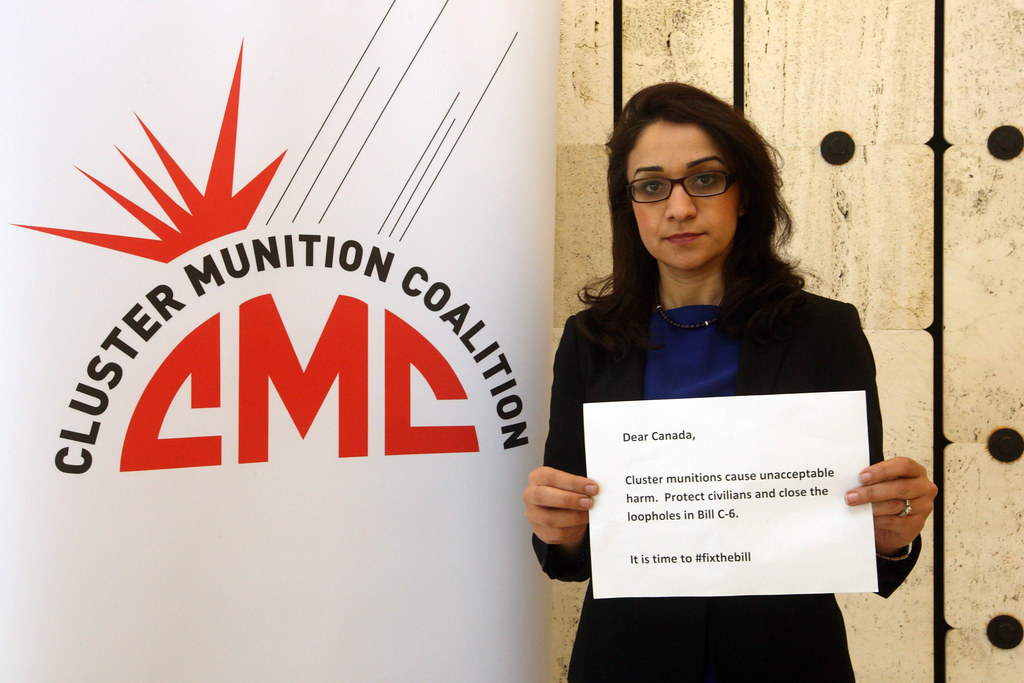 Lucy from the UK and Umedjon from Tajikistan: 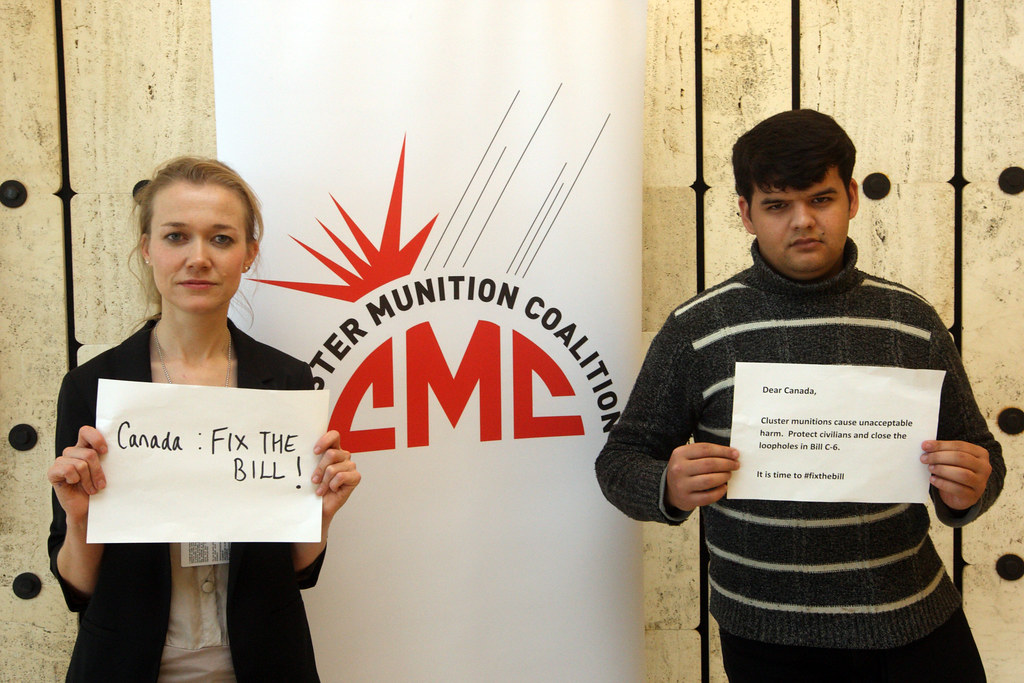 A video message from Thoummy in Laos: 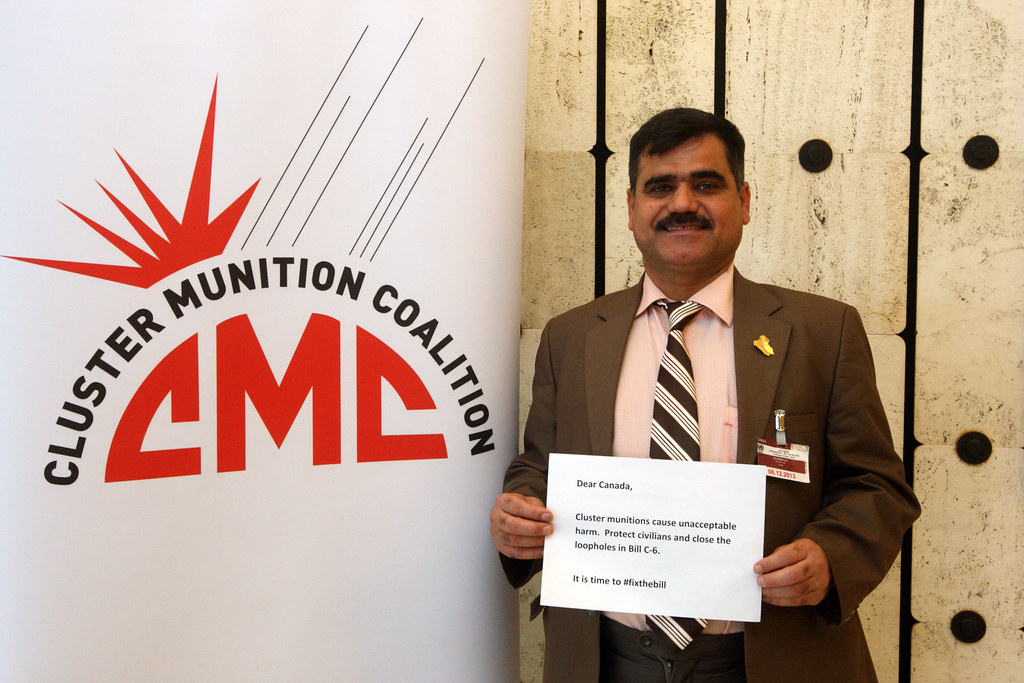 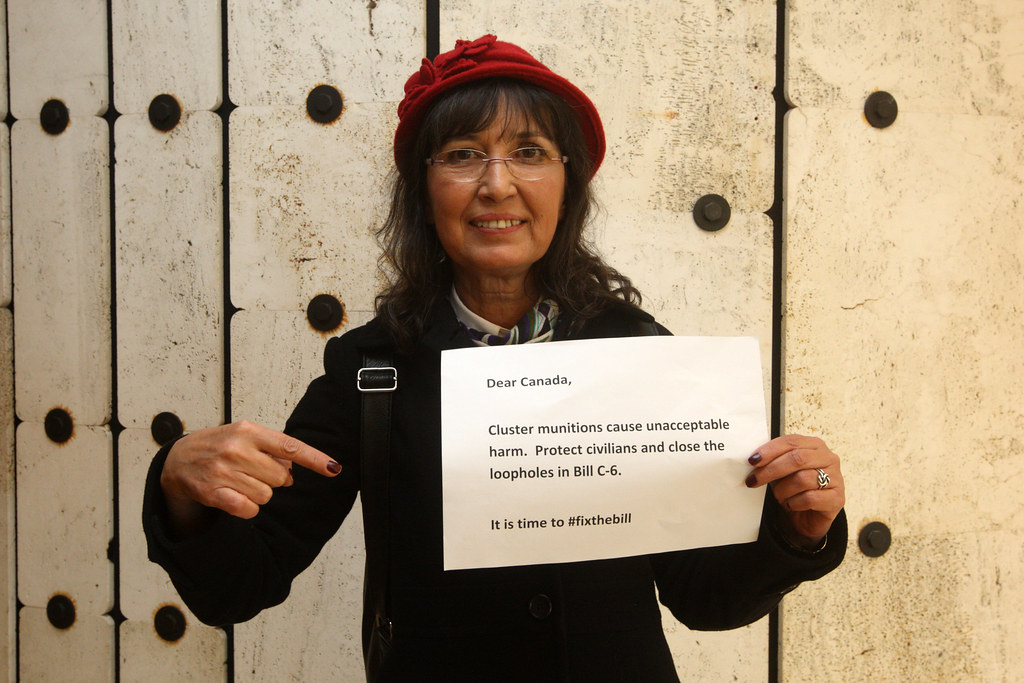 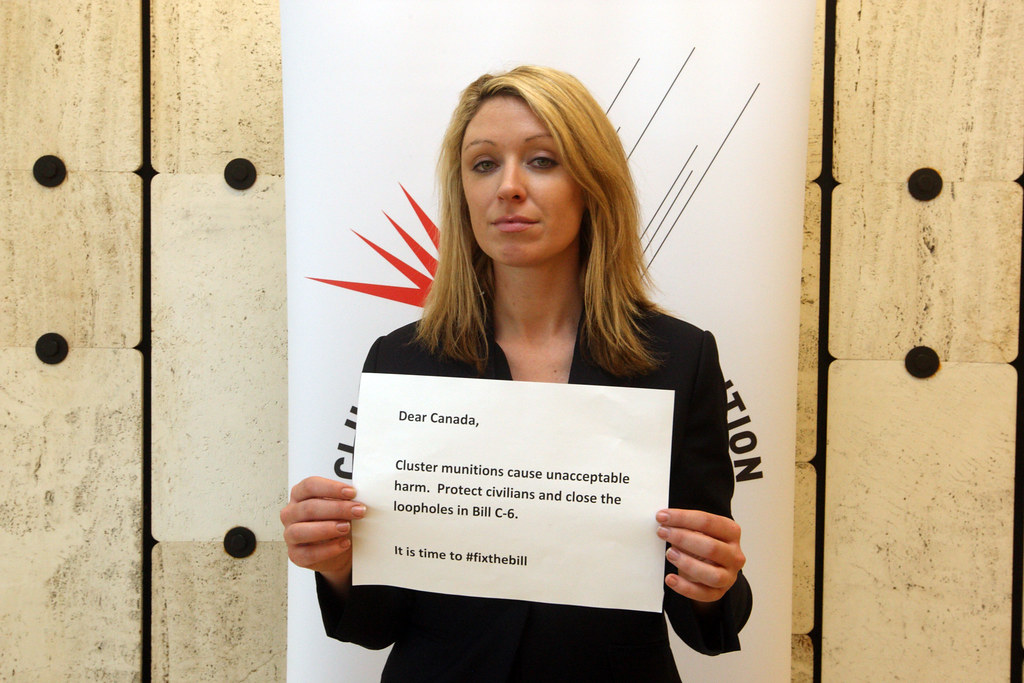 Serena from Taiwan Province of China: 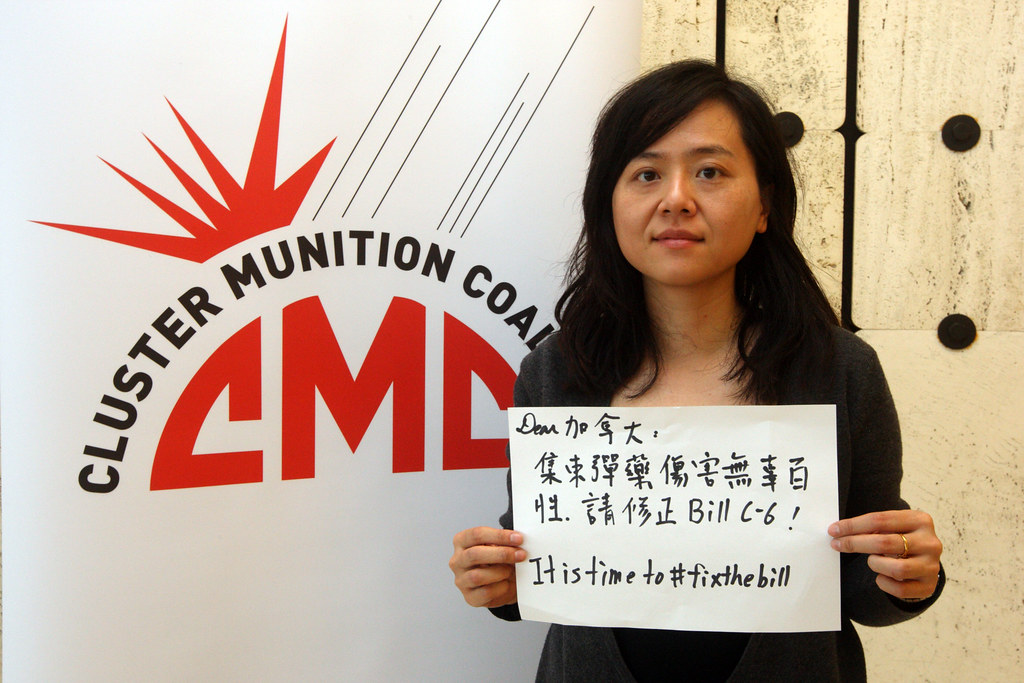 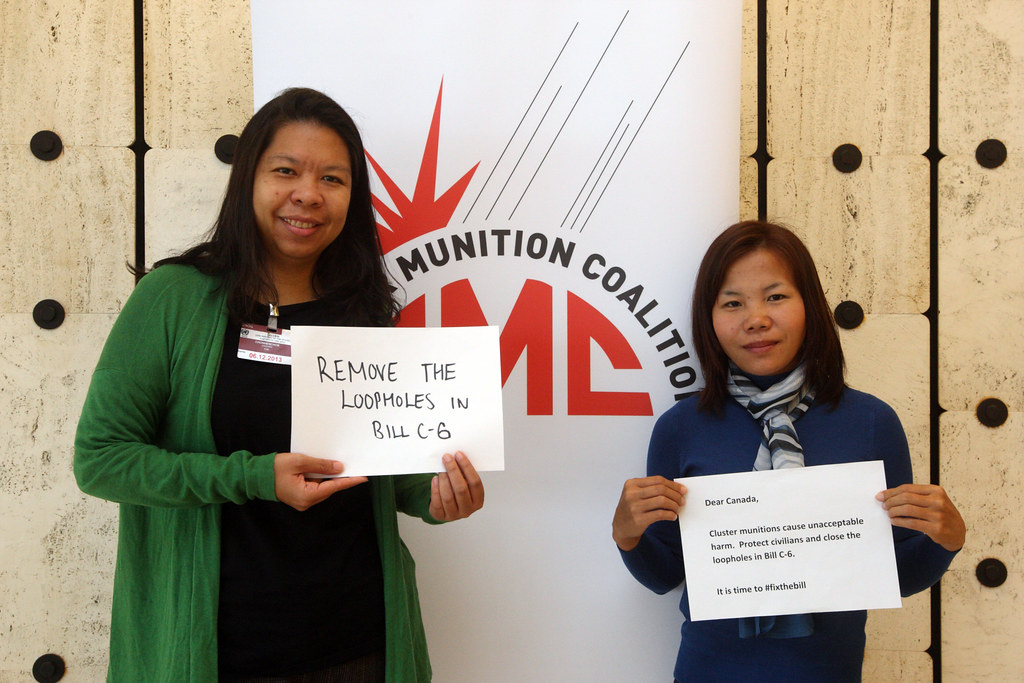 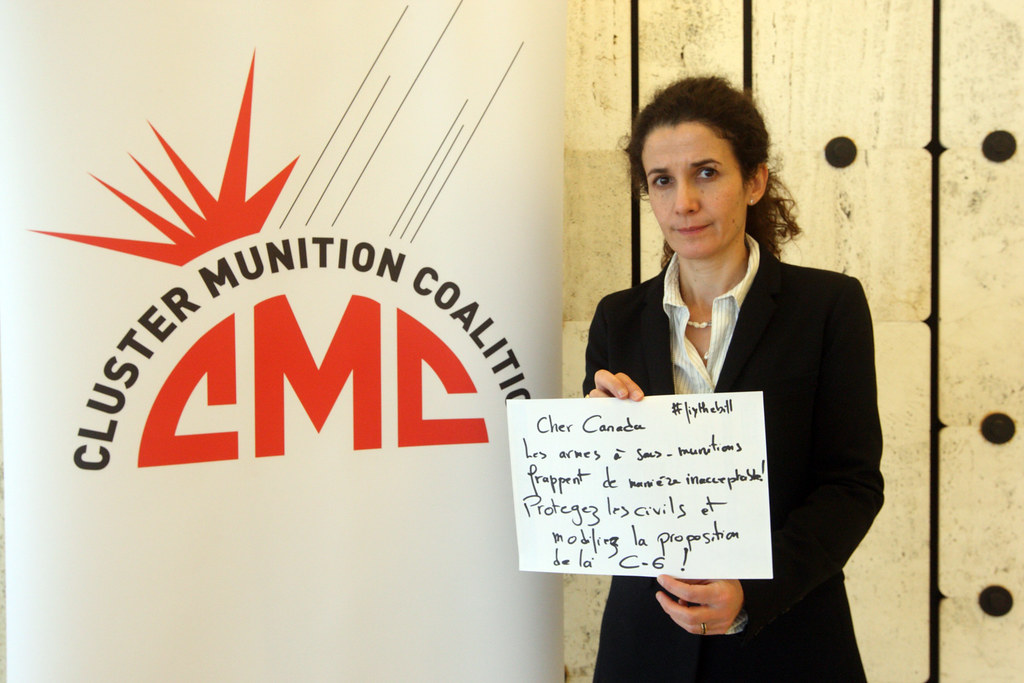 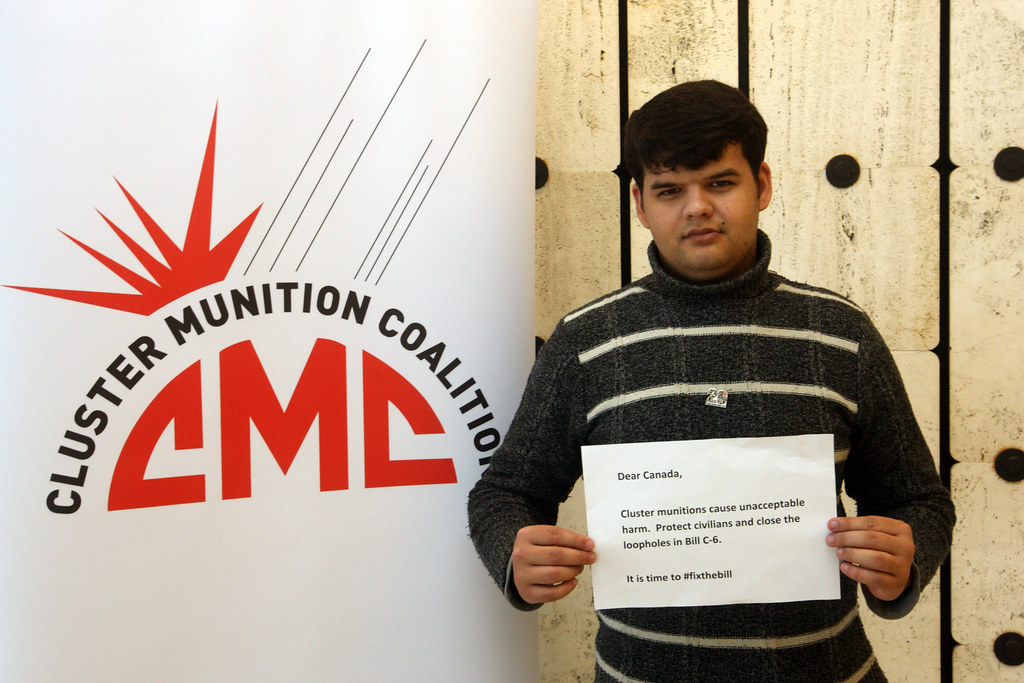 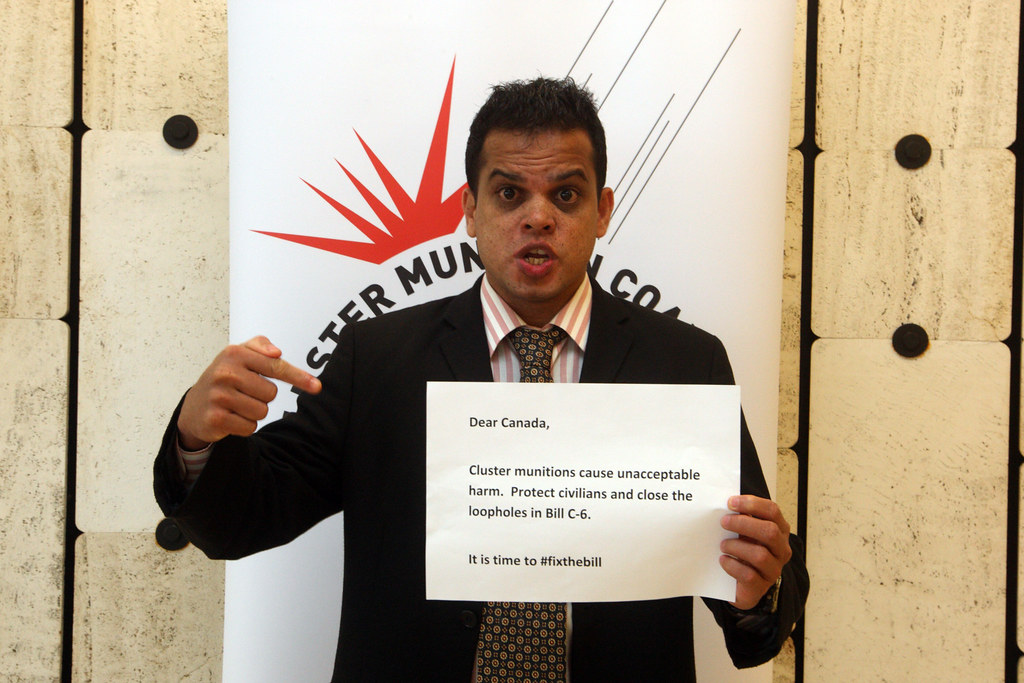 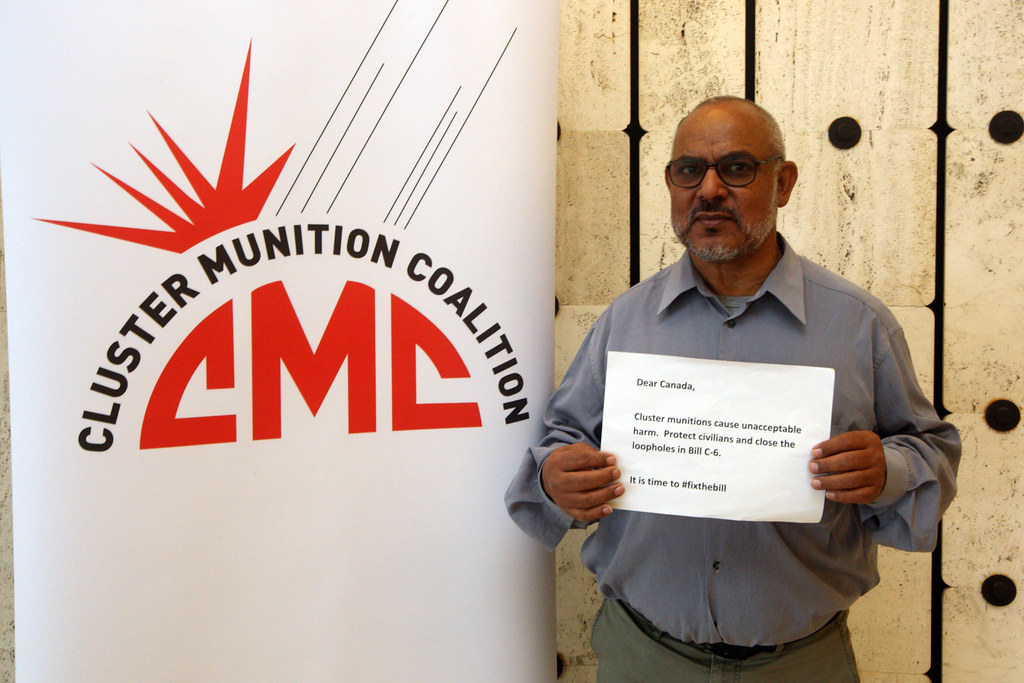 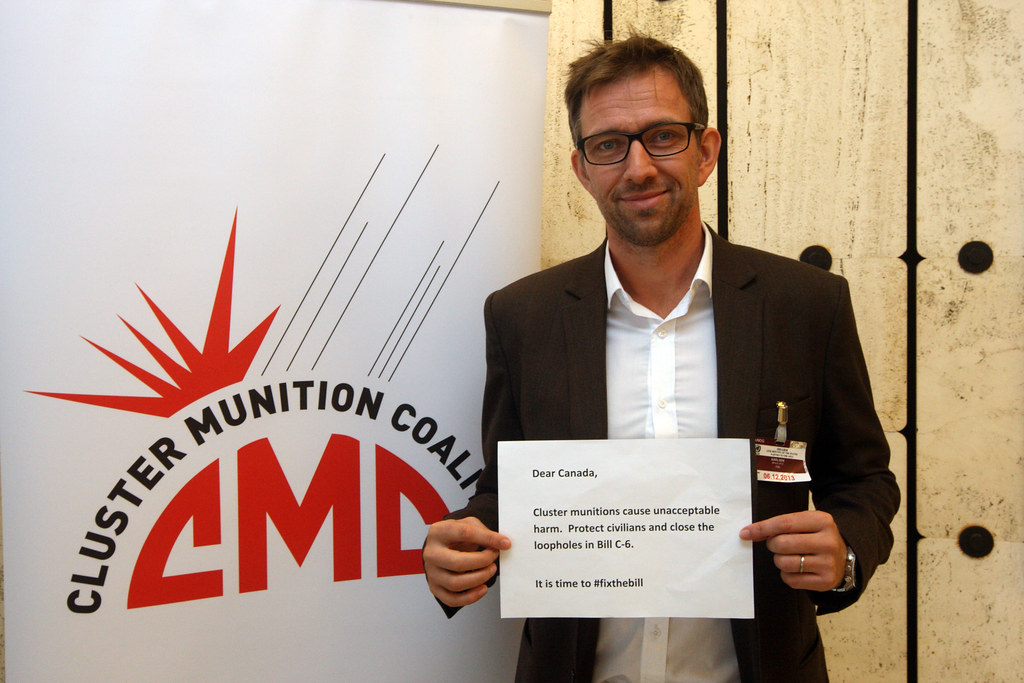 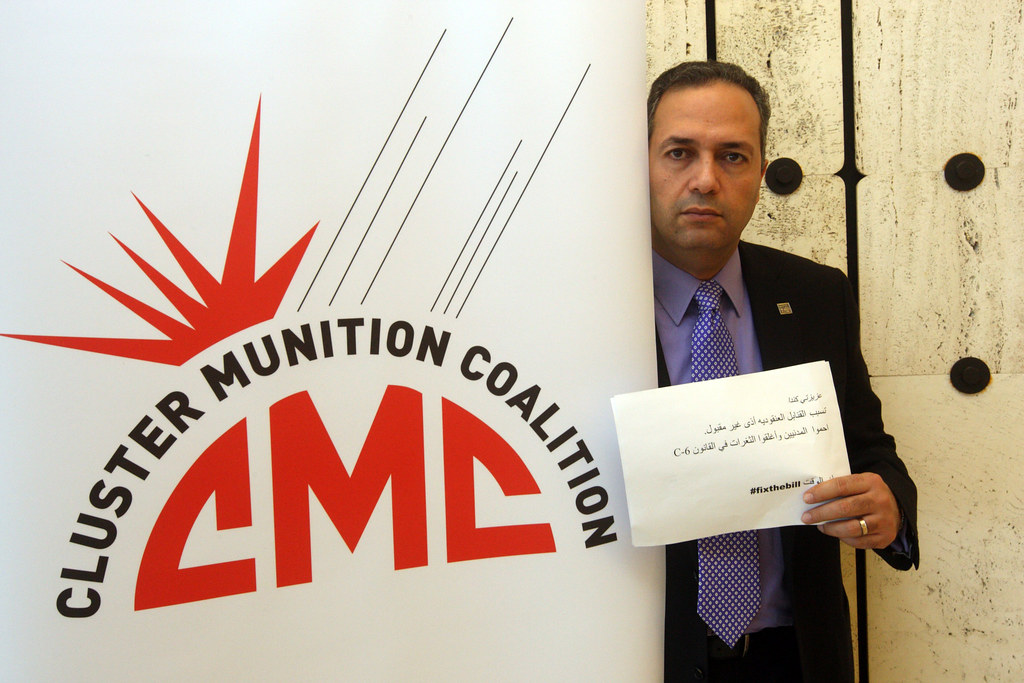 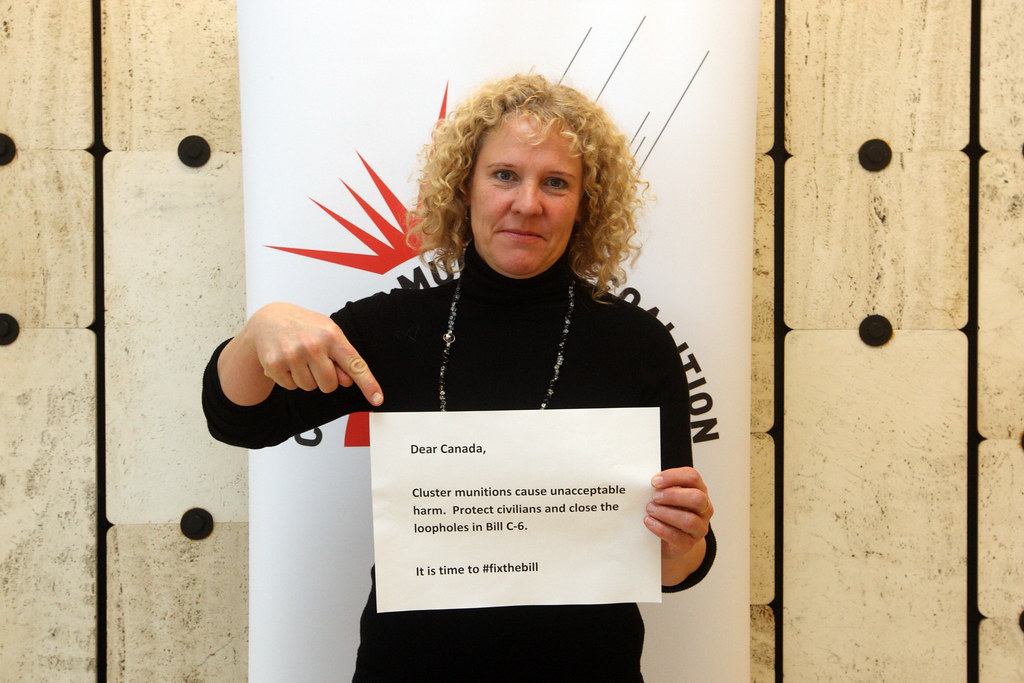 Lucy from London and Geoffrey from South Sudan: 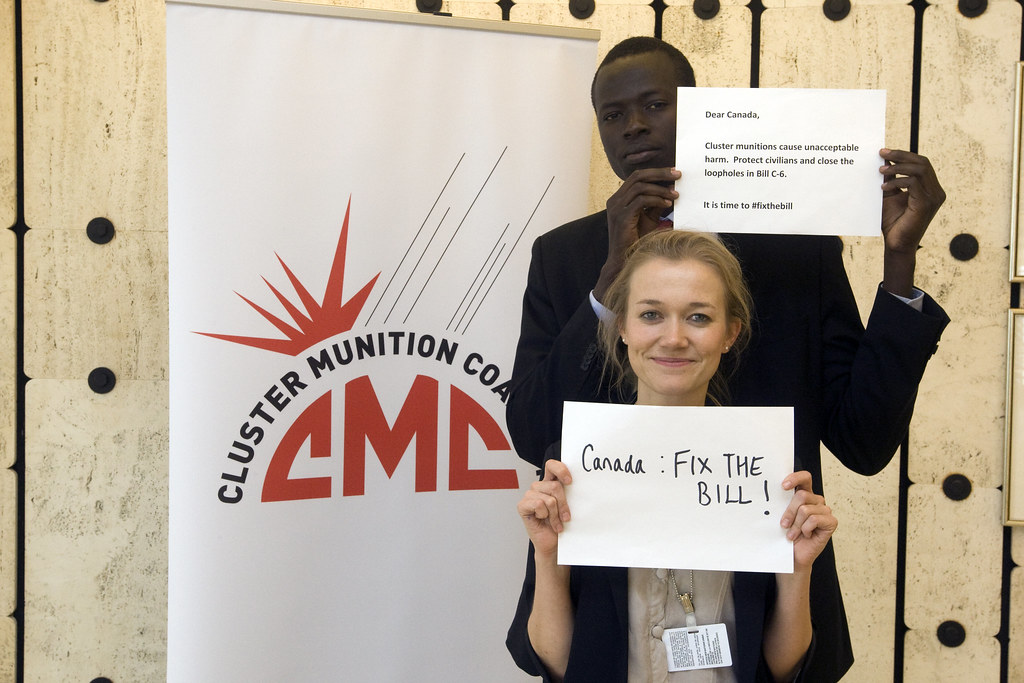 Jeff from the USA: 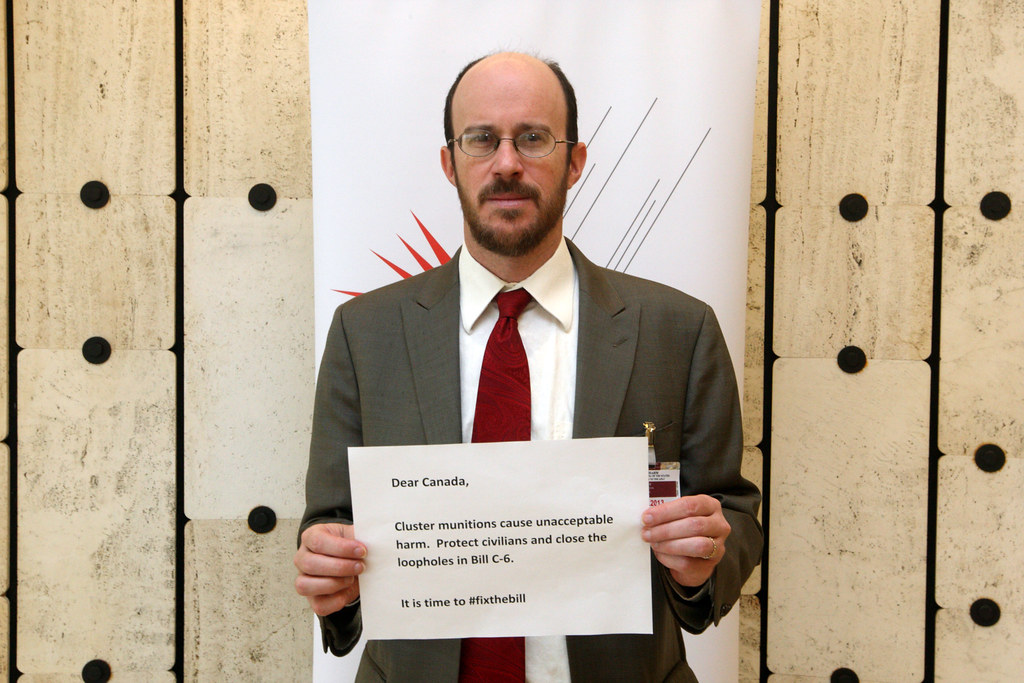 Ken from the USA: 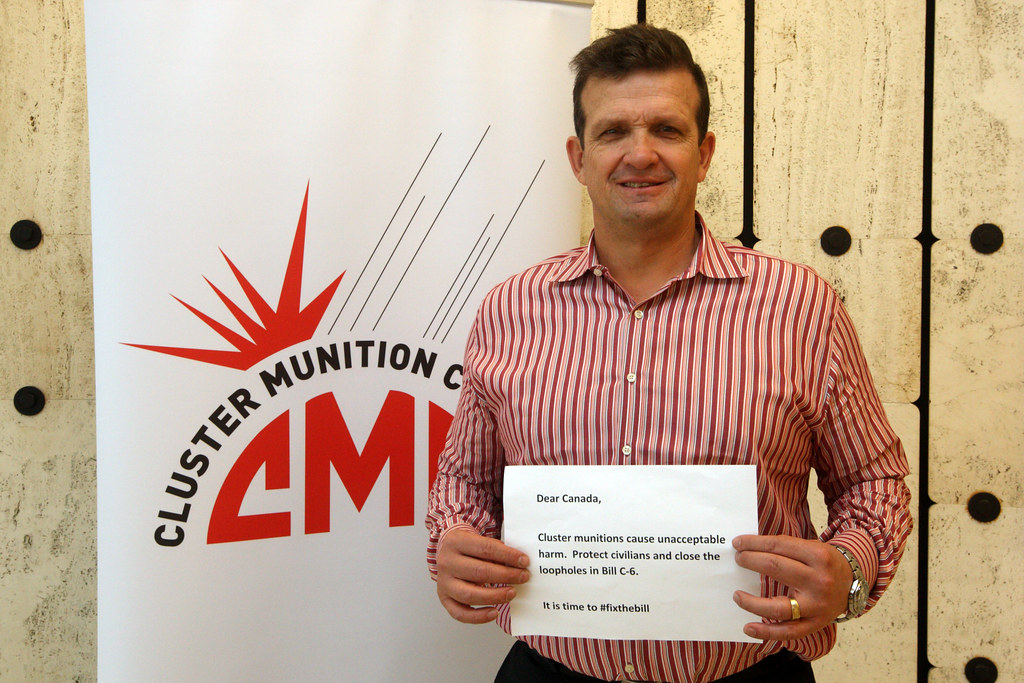 A video message from Richard in the UK: 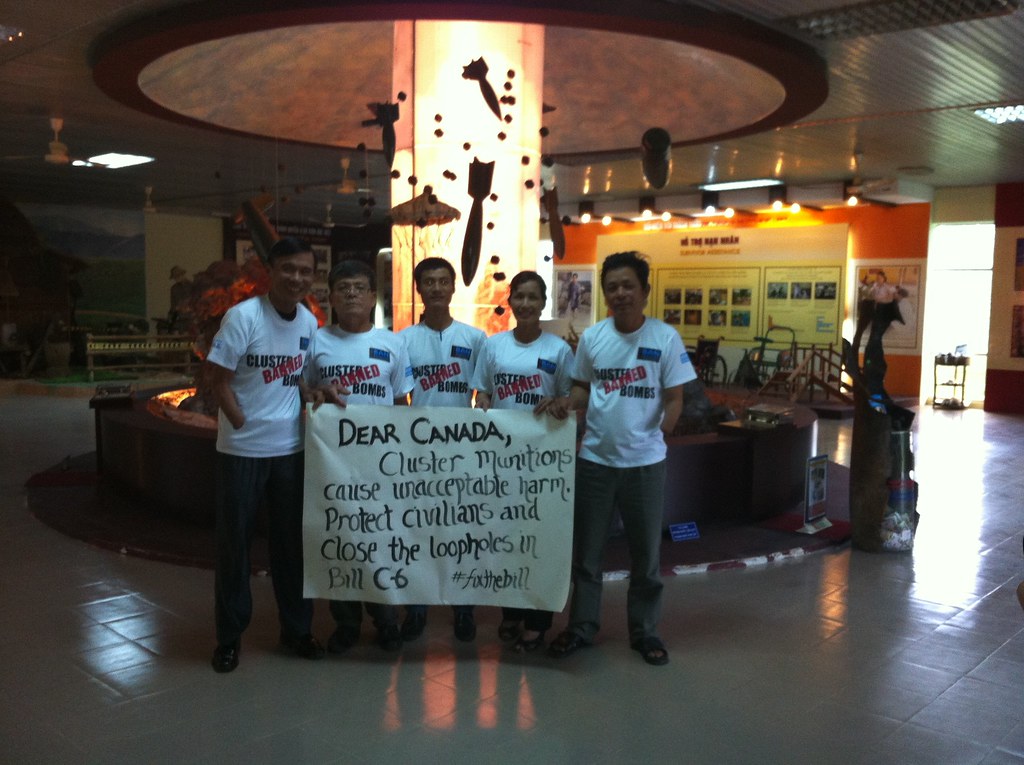 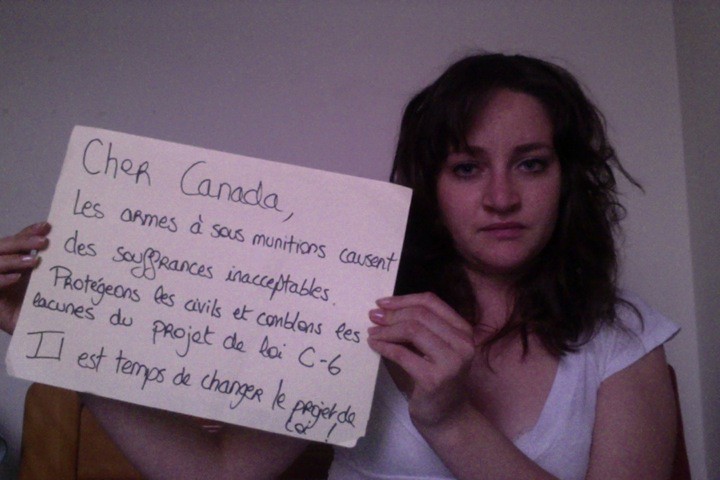 Tamar from the United States: 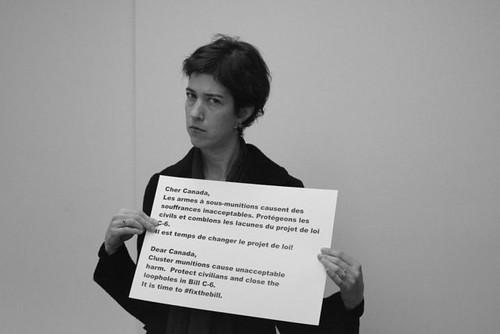 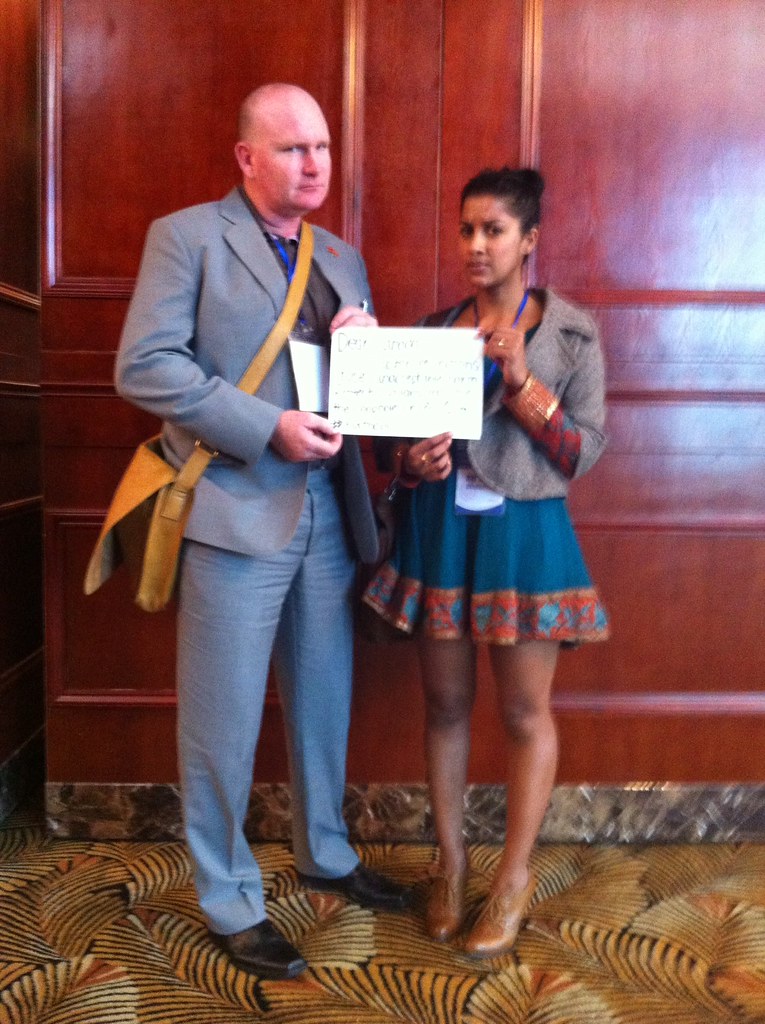 A video message from Susan from the United States:

Kasia, Tamar and Firoz in Geneva: 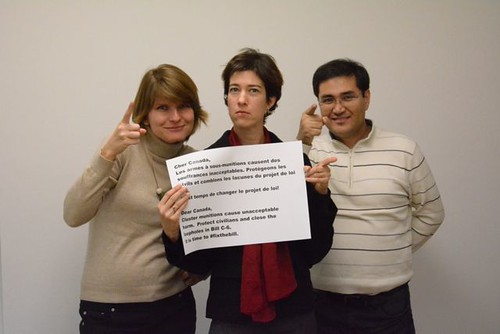 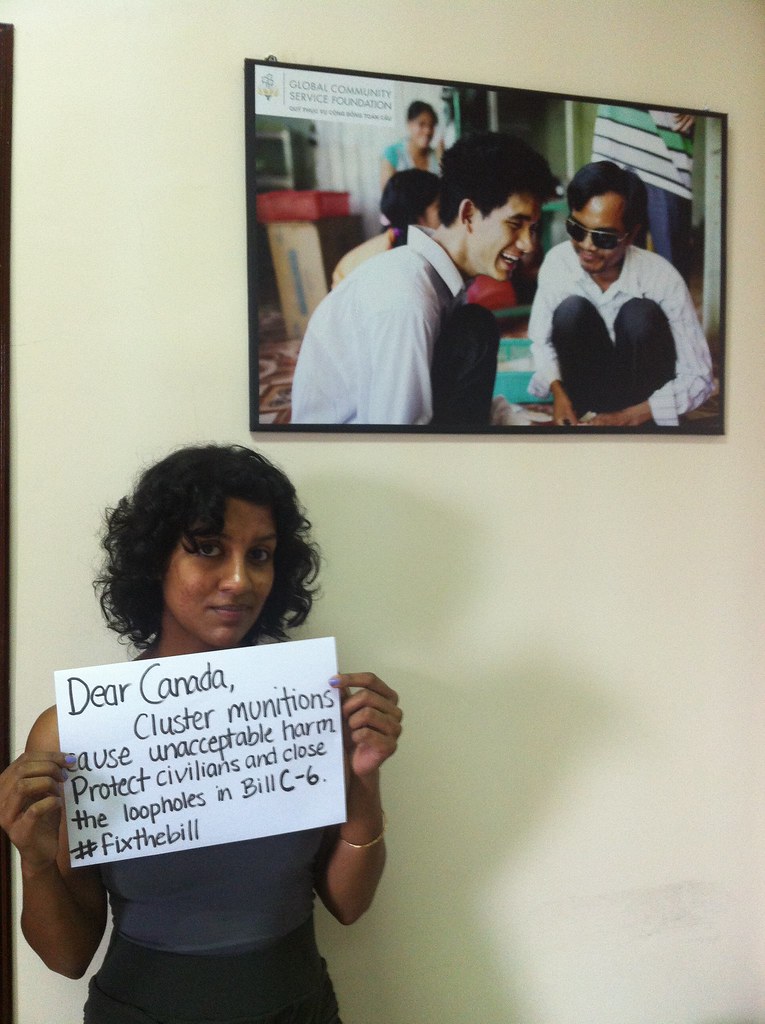 The Landmine Survivors Initiative in Bosnia: 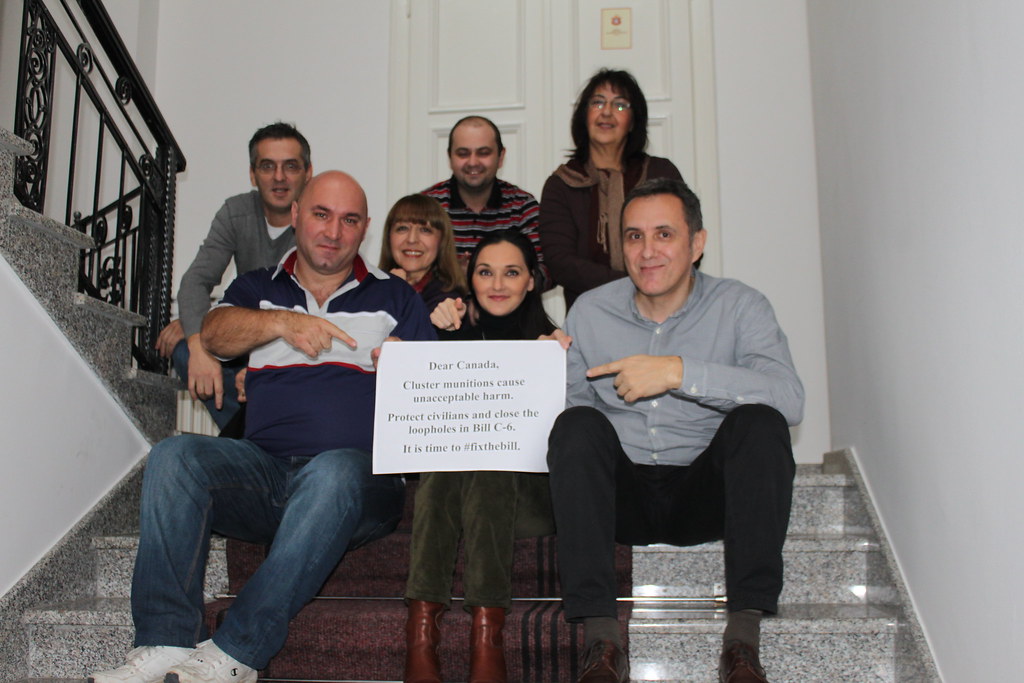 Merel, Lucy and Amy in London: 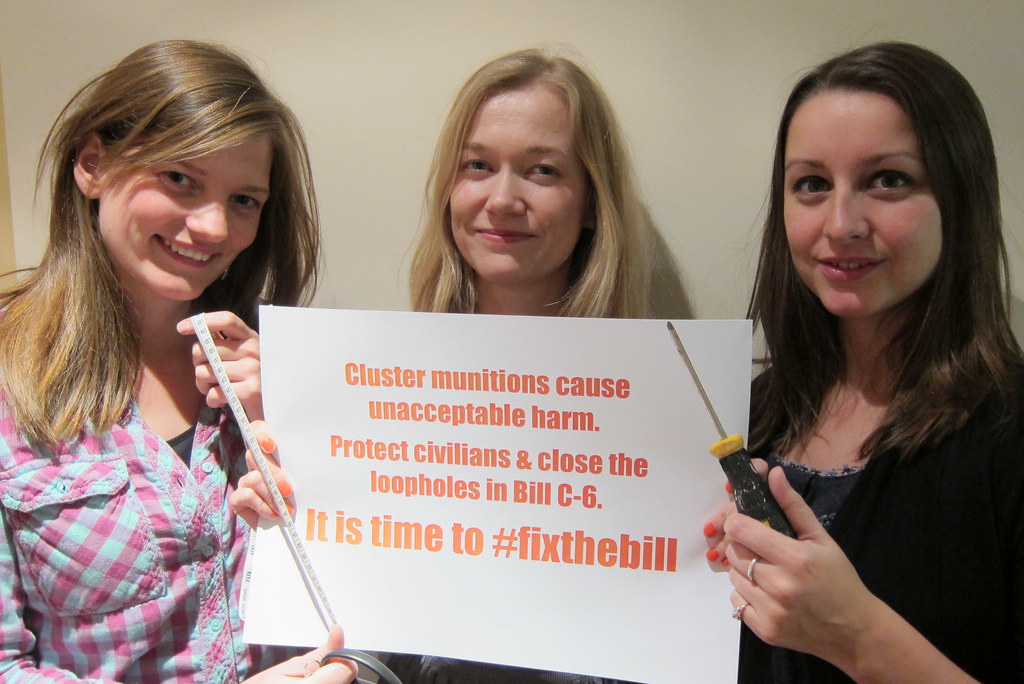 Chuck, a Vietnam vet who clears cluster bombs in Vietnam: 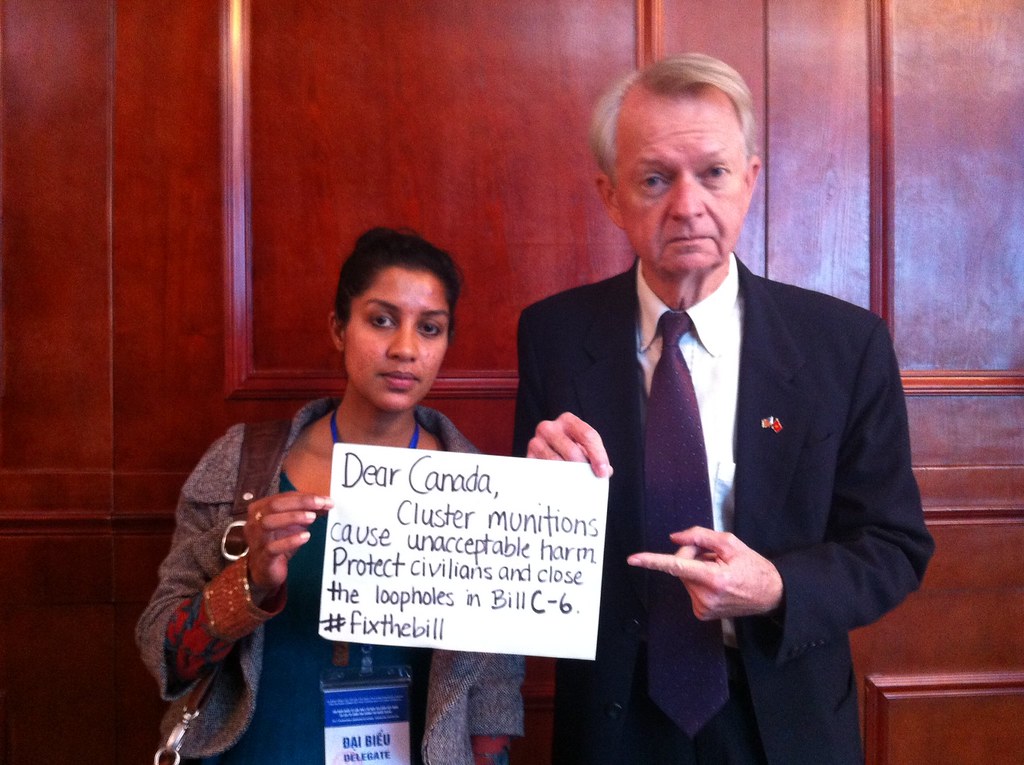 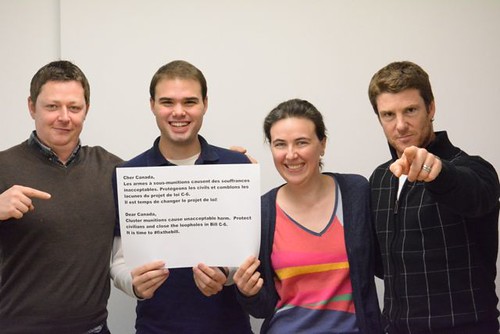 Firoz from Afghanistan has a video message for Canada:

Mr. Thi and friends in Vietnam: 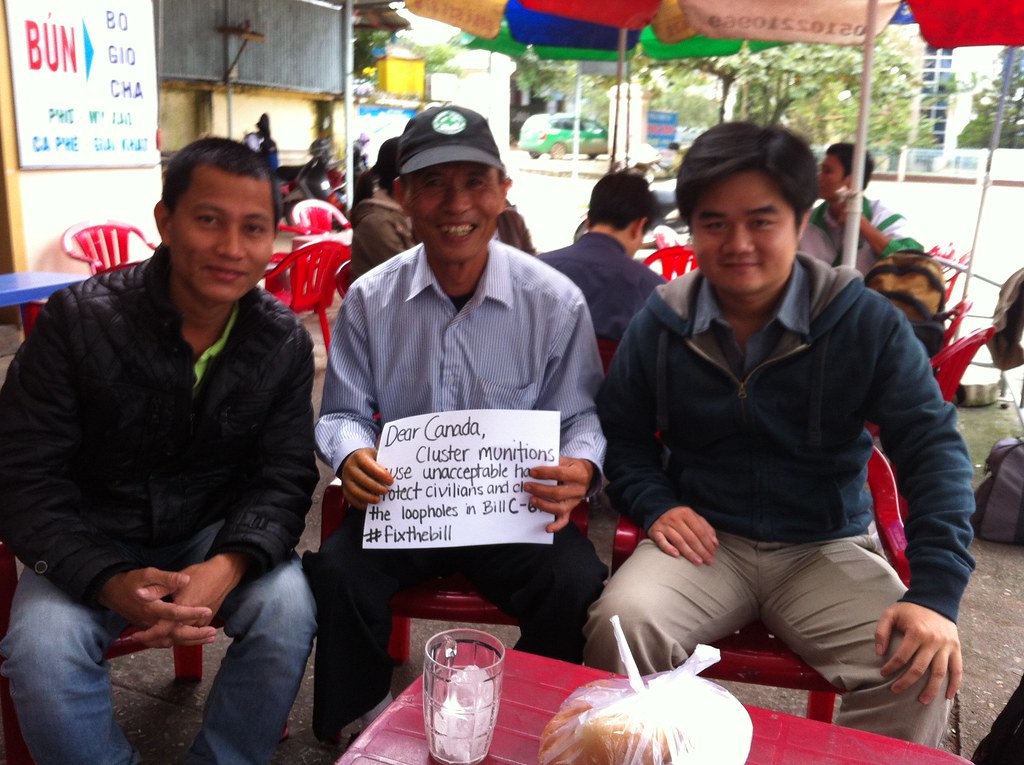