At the 16th Meeting of States Parties to the Ottawa Treaty, Mines Action Canada hosted a Women in Disarmament Youth Leaders 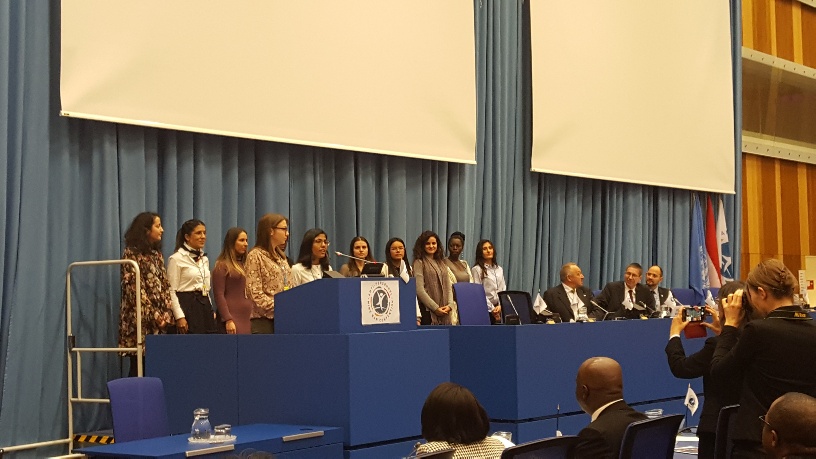 Forum supported by the Governments of Australia, Canada and Ireland.

After four days of training, mentoring and participation in the meeting, the 12 young women leaders addressed the plenary on the final day of the meeting.

Their statement is available in English, French, Spanish and Arabic.

The Women, Peace and Security agenda covers a wide variety of issues including work on disarmament. When it comes to disarmament the Ottawa Treaty banning landmines is at the forefront of most discussions in Canada especially with the 20th anniversary of the Treaty’s signing coming a month after the launch of the CNAP. The WPS global agenda and the CNAP in particular are closely linked to efforts to implement the Ottawa Treaty.

Mines Action Canada was pleased to see “Take gender-responsive approaches to disarmament, demobilization and reintegration, to transitional justice and reconciliation, to small arms and light weapons, to mine action, and to human trafficking” (emphasis added) was listed as an action under the heading of Programming in the CNAP’s Theory of Change. Mine action is an umbrella term for the activities required to implement the Ottawa Treaty: landmine clearance, victim assistance, research and advocacy, stockpile destruction, and risk education. The inclusion of mine action in the CNAP’s actions is crucially important as mine action, the Ottawa Treaty and the global landmine problem are relevant in differing degrees to the five objectives set out in the CNAP.

In this paper, we will explore the links between mine action, Canada’s obligations under the Ottawa Treaty and the five objectives in the CNAP. In the annex, some of the targets and goals set out by Global Affairs Canada will be assessed in more detail.

The Ottawa Treaty provides an excellent example of the results of increasing meaningful participation of women, women’s organizations and networks in peace and security work. The 1997 Nobel Peace Prize Laureate International Campaign to Ban Landmines (ICBL), a driving force behind the negotiation and the ongoing implementation of the Ottawa Treaty, has always been a women-led movement. In the ICBL women lead at the national and international levels.

One way the ICBL increases the meaningful participation of women in disarmament, peace and security, is through small grants. The ICBL like other international disarmament campaigns and networks issue small grants to grassroots organizations to support their work. These small grants provide much needed funding directly to women-led organizations, often working at the intersection of disarmament, disability rights and women’s rights. These organizations are usually too small to be noticed in donor state capitals or to be able to receive funding directly from states. Through grants from the international campaigns they can receive visibility and funding at a scale that is manageable yet significantly enhances their effectiveness.

Research shows that women still make up less than a quarter of delegates to disarmament forums at the international level.[1] Civil society tends to have more diverse representation at disarmament forums. Civil society organizations also have the capacity to ensure that newcomers to disarmament forums have mentorship and assistance in navigating the archaic and patriarchal structures that dominate international discussions on peace and security.  One way to support meaningful participation of women, women’s organizations and networks in peace and security is to support the international campaigns and networks who have a proven track record in bringing diverse voices to the table.

Prevent, respond to, and end impunity for sexual and gender-based violence perpetrated in conflict and sexual exploitation and abuse by peacekeepers and other international personnel, including humanitarian and development staff

Under Article 6 of the Ottawa Treaty, Canada is obligated to provide assistance to states needing support to meet their obligations regarding clearing landmines and assisting victims. In addition, supporting clearance and victim assistance will also help Canada meet this objective under the CNAP. Landmine clearance and victim assistance programs will indirectly reduce risk of sexual and gender-based violence by allowing women and girls to return to safety and by reducing the vulnerability of female landmine survivors. To achieve this will require a return to funding mine action consistently and strategically.

The mine action sector, like all sectors, has seen its share of issues with sexual exploitation, harassment and abuse. These are issues that are being actively addressed by a number of actors; however, there is much work to be done to end these crimes and ensure justice for those harmed. Mines Action Canada welcomes the focus on ending impunity for exploitation and abuse and will work with all those committed to these ends.

Promote and protect the women’s and girls’ human rights, gender equality and the empowerment of women and girls in fragile, conflict and post-conflict settings

Organizations involved in implementing the Ottawa Treaty have long had a focus on gender equality. Hiring of women is a key priority for a number of organizations as a path towards gender equality and empowerment. As Mines Advisory Group and the HALO Trust wrote “Employment of women in mine action can change attitudes towards women. In post-conflict contexts employing female deminers brings women into the peacebuilding process and helps them contribute to the reconstruction of their communities.” Women deminers are not only employed but they are seen as powerful agents of change in their communities.

Meet the specific needs of women and girls in humanitarian settings, including the upholding of their sexual rights and access to sexual and reproductive health services

The new CNAP sets ambitious objectives for national implementation of the Women, Peace and Security resolutions. The Women, Peace and Security agenda is crucially important to Canada’s work on disarmament issues including the Ottawa Treaty banning landmines. By strengthening current efforts to implement the Ottawa Treaty banning landmines through a gender lens, Canada take concrete steps towards the five objectives outlined in the CNAP and towards an inclusive and peaceful world.

As Canada said in a joint statement on Gender and Disarmament Machinery at the 2017 First Committee of the United Nations General Assembly “the way disarmament issues are treated and discussed is affected by who participates in the discussion.”[2]

[2] Canada on behalf of a group of states, “Statement on Gender and the Disarmament Machinery,” 26 October 2017, http://reachingcriticalwill.org/images/documents/Disarmament-fora/1com/1com17/statements/26Oct_Canada_joint.pdf

Women lead every day of the year

In the 20 years since the signing of the Ottawa Treaty, we have seen that it is imperative that all perspectives are incorporated into mine action. We have learned that the elimination of landmines and effective victim assistance programming are impossible goals without the inclusion of women and girls.

Women, men, girls and boys all experience conflict differently and the impact of landmines is engendered. Female survivors experience many different challenges than male survivors do and women and men face differing risks from landmines, cluster munitions and other explosive remnants of war. For these reasons, those working to eliminate these weapons must acknowledge these gender differences and provide services which are accessible for both sexes. MAC, and the humanitarian disarmament campaigns we participate in, are focused on gender equality and mainstreaming gender initiatives into our work at all levels.

At the national level we see further female leadership. Margaret Arach Orech is an excellent example of women leading in disarmament. A landmine survivor from Uganda, Margaret is an ambassador for the ICBL, a globally recognized expert on survivor inclusion and assistance and is the founder of the Uganda Landmine Survivor Association. There are women like Margaret participating and leading in every aspect of mine action, specifically mine risk education, clearance, and victim assistance. We see women conducting risk education, clearing landmines, providing assistance to victims, monitoring the treaty and doing advocacy around the world.  Since women’s empowerment and participation is an objective of the Canadian government, it is crucial that Global Affairs Canada recognizes and supports women leaders, like Margaret, in all aspects of mine action and disarmament.

It has been 20 years since the Ottawa Treaty was signed, and without the hard work of women around the world every single day of those 20 years the mine action and disarmament communities would be nowhere near as successful as we have been. 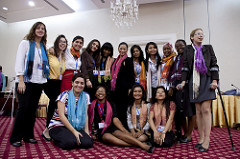 MAC believes that the next generation of women leaders will be the ones to finish the job on landmines and on all disarmament campaigns. Therefore, our key focus for 2017 is increasing young women’s involvement in disarmament, peace and security. MAC hopes to host young women from mine-affected countries at a Young Women’s Leaders Forum during the Meeting of States Parties to the Ottawa Treaty in December 2017. Since it is the 20th anniversary of the Ottawa Treaty, it is a great time to bring the next generation of women leaders into the disarmament world. To help make this plan a reality, please consider donating to MAC.

Chelsea Wright is an Graduate Student at the Norman Paterson School of International Affairs, Carleton University and a Research Associate at Mines Action Canada.

The House of Commons Standing Committee on Foreign Affairs and International Development is currently undertaking a study on Women, Peace and Security to help in drafting a new Canadian Action Plan. According to the government, the purpose of this study is to examine "Canada’s role in supporting the implementation of the United Nations Security Council Resolutions on women, peace and security (1325, 1820, 1888, 1889, 1960, 2106, 2122 and 2242). Together, these resolutions necessitate the protection of women’s rights and women’s meaningful involvement in all efforts to prevent, resolve and recover from armed conflict."

Mines Action Canada strongly supports this work and submitted written testimony to the Committee based on our experience in humanitarian disarmament.  You can read our submission here.