On 3 March 2016, the Sri Lankan government finally approved accession to the Ottawa Treaty, which bans the use, stockpiling, production and transfer of anti-personnel landmines. Sri Lanka will soon be the 163rd state party to the Mine Ban Treaty, as it is also known.

Deputy Foreign Minister Harsha de Silva stated, “We decided to sign the Ottawa Convention because we have no intention of going to war again.”

Sri Lanka’s ratification of the Mine Ban Treaty is a significant step that should greatly accelerate the process of mine clearance. Now, neither the government, nor any non-state actors, can exacerbate the problem any further.

Ambassador Aryasinha, the Sri Lankan representative to the United Nations speaking at the Palais des Nations in Geneva on March 2, announced that the government wishes Sri Lanka to be a mine free country by the year 2020, and that a strategic plan is currently in the making to achieve this goal.

The Extent of Contamination in Sri Lanka

Three decades of armed conflict between the Sri Lankan government and the Liberation Tamil Tigers left behind extensive mine and ERW contamination. The conflict came to an end in 2009, by which time it is estimated that approximately 300,000 people had been displaced.

Following the war, almost 2,064 acres of land had been contaminated and were in urgent need of clearance before displaced persons could return to their homes.

While the government decided only days ago to ratify the Mine Ban Treaty, work has been underway for some time to combat the issue of contamination. For example, in July 2010, a National Mine Action Centre was created. It has become the government's lead agency in national demining efforts.

Furthermore, it was reported that in 2014, a number of NGOs conducted demining activities in Sri Lanka. This included a Sri Lankan non-profit, Delvon Assistance for Social Harmony (DASH), as well as two international NGOs – the Halo Trust, and Mines Advisory Group (MAG).

The work of these various organisations has had a significant impact, and as of December 2015, 2,000 acres of land had been cleared.

With the combination of the Sri Lankan government’s acceptance of the Mine Ban Treaty, and the significant progress that has already been made in terms of clearance, it seems extremely likely that by 2020, Sri Lanka will achieve its goal of being a mine free country.

Mines Action Canada welcomes this decision by the Sri Lankan government and thanks our colleagues in the Sri Lankan Campaign to Ban Landmines for their years of hard work to make this a reality.

This post is the first in a series by MAC student interns.

Claudia Pearson is an undergraduate student at University of Leeds currently on exchange in Ottawa.

Mines Action Canada welcomes today’s statement by the Honourable Stéphane Dion, Minister of Foreign Affairs that recommitted Canada to achieving a mine-free world by 2025 and expressed support for the universalization of the treaty banning landmines.  Minister Dion called on states to summon the same courage that landmine survivors demonstrate daily in order to achieve the goal of a world without landmines by 2025. Minister Dion made the statement in Geneva at the First International Pledging Conference of the Anti-Personnel Mine Ban Convention. Commonly known as the Ottawa Treaty it bans the use, transfer, production and stockpiling of anti-personnel landmines.

“More than 80% of the world’s states belong to the Ottawa Treaty and more than 49 million mines have been destroyed by landmines because of the treaty” said Paul Hannon, Executive Director of Mines Action Canada. “This life-saving treaty is working, but much work remains. We are pleased to see the Government engaged again at such a high level. Canada’s leadership is very important”

The Pledging Conference was organized by Chile which currently holds the Presidency of the treaty. Minister Dion appeared on a high-level panel with former UN Secretary General Kofi Annan; Peter Maurer, the President of the International Committee of the Red Cross; the Foreign Ministers of Chile and Colombia; as well as, Ms. Tammy Hall, a Canadian who is Head of Demining of the Danish Demining Group and Mr. Firoz Alizada, Campaigns and Communications Manager of the International Campaign to Ban Landmines.

This statement comes one day after the 17th anniversary of the Ottawa Treaty becoming international law. Over the past 17 years, the Ottawa Treaty has resulted in a dramatic drop in number of new casualties, nearly 30 affected countries have become free from the scourge of landmines, and the stigma on landmines continues to hold strong. With this statement, Minister Dion reaffirms Canada’s dedication and leadership in implementing the steps necessary to realize a mine-free world by 2025.

“Mines Action Canada looks forward to welcoming Sri Lanka to the Mine Ban Treaty.  As a mine-affected country, Sri Lanka knows all too well the humanitarian harm caused by these horrific weapons,” said Erin Hunt, Program Coordinator.  “Sri Lanka’s announcement is another step towards a mine-free world and should serve as a call to neighbouring states that it is time to ban landmines.”

The Pledging Conference also saw strong statements and funding announcements by Australia, Cambodia, Finland, Jordan, Thailand, and more than 25 other states. Mines Action Canada looks forward to working with the Government of Canada and partners around the world in achieving a world without landmines.

After Hungary closed its border to refugees, there have been reports that refugees are starting to seek a new route to safety through Croatia.

Before we talk more about this issue, some landmine safety notes for anyone travelling through Croatia (Google translated into Arabic). 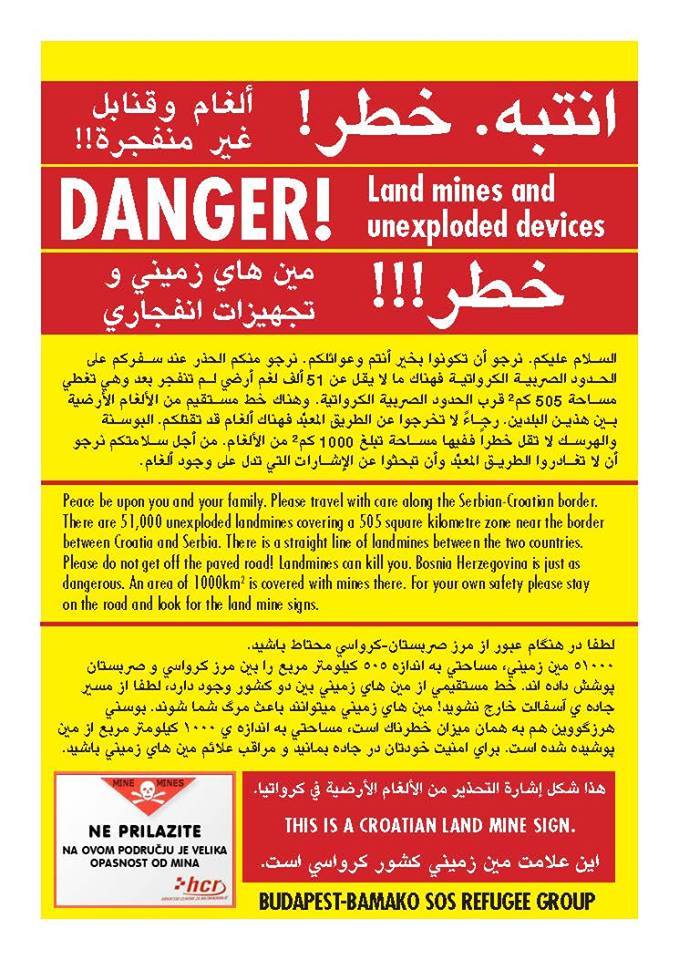 Croatia is not the only place where landmines threaten refugees as they attempt to find safety. To make things easier, we will focus on the impact of landmines, cluster munitions and other explosive remnants of war (ERW) on Syrian refugees but the Landmine Monitor has a factsheet on landmines/ERW, refugees and displacement that covers the issue globally.

The border between Turkey and Syria has large minefields which have caused numerous casualties among those fleeing Syria. There are reports of displaced persons living in the minefield between Turkey and Syria. Refugees in Iraq and Lebanon face threats from landmine and ERW as well. Recently, we have heard reports of Syrian refugees being killed and  injured by cluster munitions in Lebanon.

While solving some of the conflicts that are driving the current refugee crisis may be slow and incredibly difficult, we can make the road to safety much more secure. A priority must be to fund mine clearance along borders and near refugee camps and settlements. Today Croatia started moving mine clearance teams to the borders to help prevent casualties. Funding this sort of emergency clearance operations is something Canada should be doing - it is an effective way of saving lives and helping live up to our obligations under the Ottawa Treaty banning landmines. No one should risk death or disability as they seek safety. In addition, emergency risk education is ongoing among refugee communities but it could be scaled up dramatically with increased funding.

There is no debate that clearing minefields can save the lives of refugees now and into the future. It must be a priority.

Map from the Croatian Mine Action Centre of mine fields near the Serbian border.

The Smashing Pumpkins music video for "Drum+Fife" is visually stunning and powerful.  It brings light to the fact that wars don't end just because the guns fall silent and a peace agreement is signed.

Landmines, cluster munitions and other explosive remnants of war continue to kill and maim years or decades after conflict while those who fought often return home with visible and invisible injuries only to be forgotten.

Since the video focuses on children passing through a mine field, let's look at the most recent statistics about landmine casualties.  The Landmine Monitor 2014 has the most up to date information about the global landmine situation.

While these figures are distressing they demonstrate a marked improvement compared to the situation before the Ottawa Treaty banning landmines.  The Ottawa Treaty has led to an incredible decrease in the number of landmine casualties globally since it became international law in 1999 but there is still a long way to go. We need all states to join the Ottawa Treaty and commit to a mine free world. Learn more by visiting our website or www.the-monitor.org and support our work by donating online.