The Government of Ireland released the final draft of a political declaration on the use of explosive weapons in populated areas after the conclusion of a three year process. Mines Action Canada participated in the process in person and online over the past three years. We were pleased to be in Geneva for the final meeting and were able to deliver the following statement.

Mines Action Canada would like to thank the Government of Ireland and you Ambassador for your able steering of this process through quite choppy waters.

We welcome the final text and as a founding member of INEW, we support the comments made by our colleagues but we would like to take this opportunity to add a few comments in our organizational capacity.

We, of course, would have liked to see a strong commitment by states to avoid the use of explosive weapons with wide area effects in populated areas but we believe that this political declaration will be a stable foundation for ongoing work to protect civilians from the harm caused by explosive weapons use.

Mines Action Canada appreciates the recognition of the impact of unexploded ordnance on civilians in paragraph 1.6 and the commitment to undertake 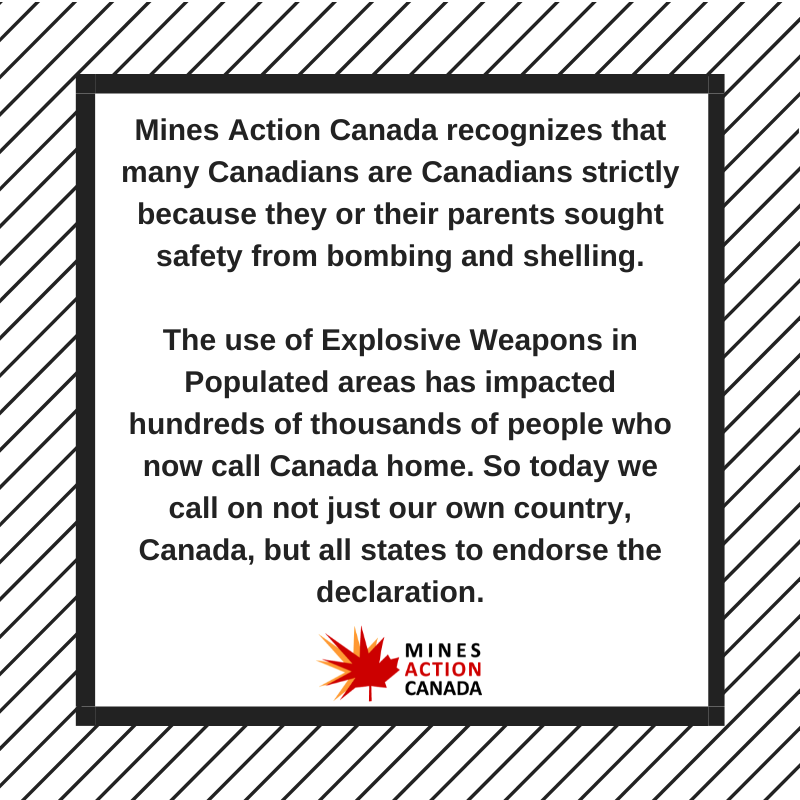 “marking, clearance, and removal or destruction of explosive remnants of war” and explosive ordnance risk education in paragraph 3.5.

We welcome the commitments towards victim assistance. Victim assistance is crucially important as the impact of EWIPA lasts long after the bombs fall silent. The references to gender in 1.10 and 4.5 are also very important as effective policy and practice must recognize the different impacts of EWIPA on people of different genders and ages.

Mines Action Canada believes that it is always appropriate and feasible to make publicly available disaggregated data on the direct and indirect effects on civilians and civilian objects of military operations involving the use of explosive weapons in populated areas.

We are pleased that the political declaration recognizes the crucial role that civil society has played in the development of the declaration and will continue to play in its universalization and implementation.

We join INEW in pledging to support the ongoing work on this declaration. Although Canada has not seen bombing and shelling of our cities and towns, the reverberating effects of EWIPA have shaped countless Canadians. In my family, my 97-year-old aunt still speaks of how “horrid” it was to be sent away from her family in Edinburgh as a child during the Blitz. But she is not alone, Mines Action Canada recognizes that many Canadians are Canadians strictly because they or their parents sought safety from bombing and shelling - whether it is was from Vietnam in the 1970s, Lebanon in the 1980s, the Balkans in the 1990s, Iraq and Afghanistan in the 2000s, Syria in the 2010s or the Ukrainians who are arriving as we speak. The use of Explosive Weapons in Populated Areas has impacted hundreds of thousands of people who now call Canada home.

For more than a decade we have seen a deadly pattern of harm that requires changes in policy and practice to protect civilians and civilian objects. There needs to be stronger restrictions on the use of these weapons. The commitments in this declaration are a good starting point for the international community’s shared goal of reducing civilian harm. To echo the words of you Ambassador Gaffey, we hope the conclusion of these negotiations “is just the beginning rather than the end of this important process.”

The process thus far has shown that the problem of explosive weapons use in populated areas is a global problem that needs a global solution. So today we call on not just our own country, Canada, but all states to endorse and implement the declaration.

The political declaration will open for endorsement in the fall and we hope to see Canada in Dublin to sign on to this important commitment. Canada was one of the few states to not commit to signing the Declaration in today's meeting so we call on Canada to make their support for the declaration clear and sign on in Dublin. Read more about the whole process on the Government of Ireland's website.