On December 3rd, 2008 governments from around the world signed the most significant disarmament and humanitarian treaty of the decade, banning the use, production, transfer and stockpiling of cluster munitions, and obligating them to provide victim assistance and to clear contaminated land.

Cluster bombs (also referred to as cluster munitions) include cargo containers and submunitions. Fired, launched or dropped by aircraft or land-based artillery, the containers open and disperse bomblets or submunitions over a wide area, often resulting in very dense contamination. The bomblets are designed to pierce armour and can kill anyone within a range of 50 meters with its explosive lethal charge. A single cluster bomb strike can spread hundreds to thousands of bomblets over as much as one square kilometer - with no distinction between military or civilian targets. Cluster munitions also have a failure rate ranging from 5-30%. Those that do not explode on impact become explosive remnants of war. These 'dud' munitions become de facto landmines and must be treated and cleared as such. Throughout 2001-2002, 1,228 cluster bombs containing 248,056 submunitions were used in Afghanistan. In 2003, 13,000 cluster munitions containing an estimated 1.8 to 2 million submunitions were used in Iraq.

To date, 120 countries have joined the Convention on Cluster Munitions (CCM) since it opened for signature and 103 countries have ratified it – it entered into international law on August 1st 2010.

With the pressure of the civil society in the form of the Cluster Munition Coalition, Norway launched an initiative in February 2007, known as the Oslo Process, following the failure of government talks within the traditional forum for discussing weapons issues – the Convention on Certain Conventional Weapons (CCW). Led by Norway and other supportive governments including Austria, the Holy See, Ireland, New Zealand, Mexico and Peru, the Oslo Process set out to create an international treaty by the end of 2008.  The February 2007 “Oslo Declaration” was endorsed by 46 countries and committed them to conclude a treaty that would prohibit the use, transfer, and production of cluster munitions that cause unacceptable harm to civilians, would require the destruction of existing stockpiles, and provide adequate resources to assist survivors and clear contaminated areas. Following the meeting in Oslo, a series of international conferences were hosted by other supportive governments to discuss the terms of the treaty in Peru, Austria, New Zealand and Ireland. Around 140 countries participated in one or more of the Oslo

The Convention on Cluster Munitions was finally negotiated and its wording was adopted at the Dublin Diplomatic Conference on May 30th, 2008 by 107 states.  It is a legally binding international treaty that forbids the use, production, stockpiling and transfer of cluster bombs. 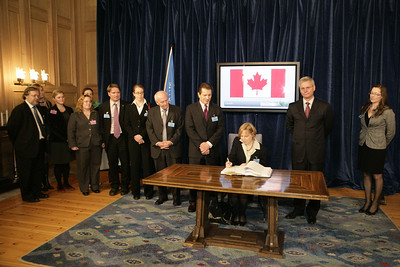 Like chemical, biological, and antipersonnel landmine conventions before, the Convention on Cluster Munitions bans an entire category of weapons. The Oslo treaty sets the highest standard to date in international law for assistance to victims and their communities. It obliges nations to destroy all stockpiles within eight years and to clear contaminated land within ten. States must also provide detailed annual transparency reports on progress towards meeting their legal obligations.

Read all our news about cluster munitions here and learn more about efforts to Stop Explosive Investments.

What still needs to be done?

Use of cluster munitions must be stopped, survivors assisted and unexploded submunitions need to be cleared.

We can absolutely solve this problem in our lifetime – but not without your help! Please ACT, GIVE or LEARN more today.