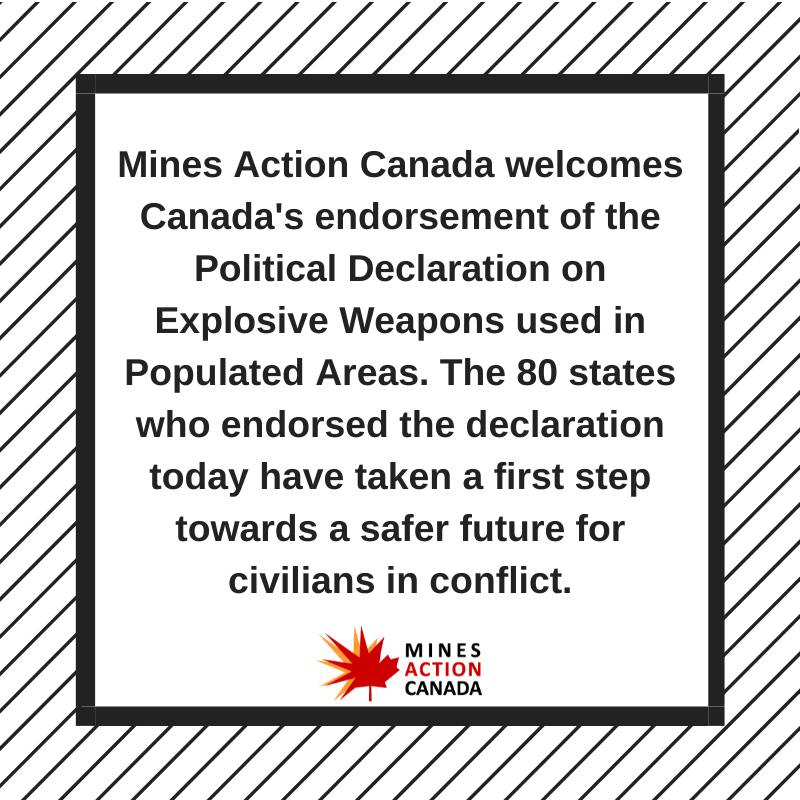 Dublin, 19 November 2022 – 82 states, including Canada and many allies, met at Dublin Castle this Friday, to sign the “Political Declaration on Strengthening the Protection of Civilians from the Humanitarian Consequences Arising from the Use of Explosive Weapons in Populated Areas”. The landmark agreement addresses the widespread civilian suffering and devastation resulting from the bombing and shelling of cities, towns, and other populated areas. Mines Action Canada, Project Ploughshares and Humanity & Inclusion Canada, the Canadian members of International Network on Explosive Weapons (INEW), welcome the declaration and call on all states to sign and implement it.

“States are sending a clear message that using explosive weapons in populated areas causes unacceptable civilian suffering and devastation and must stop. Now Canada has to implement the Declaration to help civilians and their communities during and after conflict”, said Cesar Jaramillo, Executive Director of Project Ploughshares

The Declaration requires states to impose limits on the use of explosive weapons in populated areas, which is the leading cause of harm to civilians in conflicts today.

It also requires states to assist victims and affected communities both during and after conflict and to address the long-term suffering that stems from the use of explosive weapons in populated areas. Civilians suffer physical and psychological injury. Damage to and destruction of critical civilian infrastructure interferes with heath care, education, and other services. People are forced to flee the towns and cities in which they live and work.

“Nobody thinks about people like me, with no place to hide. This leads to psychological trauma. I was 12, in a wheelchair and terrified, but there was nothing anyone could do. When civilians are bombed it’s not only lives, cities and homes that are lost but also their future. I hope that signing the declaration will not be just a piece of paper – but the beginning of a real change. People suffering in wars around the world need it”, said Nujeen Mustafa, who fled from Aleppo, Syria to Germany.

On Friday, the morning of the conference, participating campaigners and states unveiled a ‘Memorial to the Unknown Civilian’, in recognition of the heavy toll on civilians of bombing and shelling in towns and cities across the world, in the garden of Dublin Castle.

“There is a widespread pattern of harm: when towns and cities are bombed, it is civilians that suffer the most. By joining this political declaration, Canada is standing with civilians around the world and building on the legacy of its  leadership for the Ottawa Treaty.", said Anne Delorme from Humanity & Inclusion Canada.

Before the conference, campaigners and survivors of armed conflict also gathered at a Global Civil Society Forum in Dublin on Thursday, 17 November, to look at the civilian and humanitarian problems caused by explosive weapons and to ensure the international declaration makes a meaningful impact. 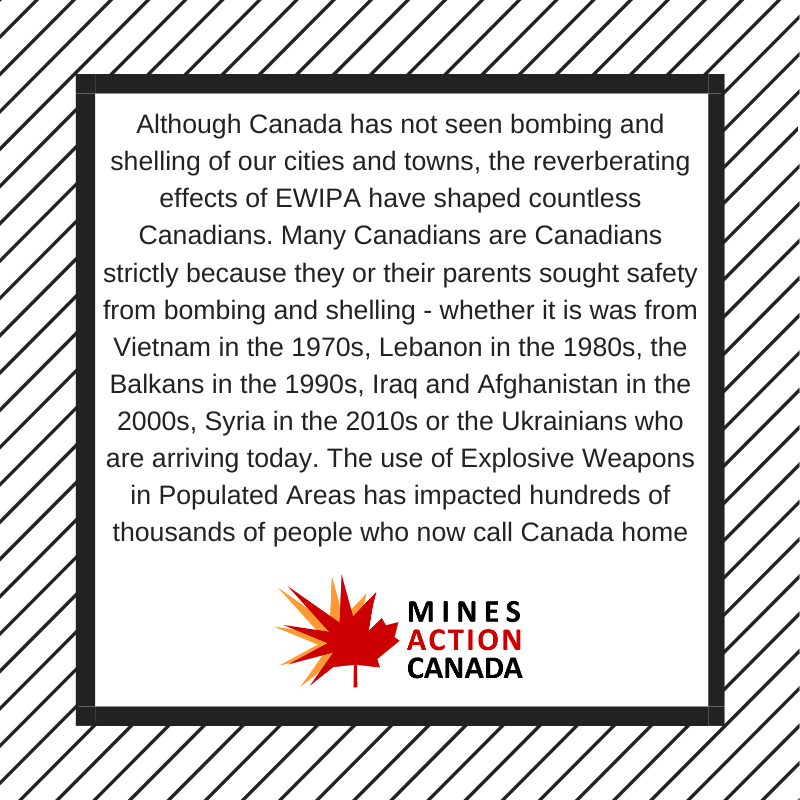 "Although Canada has not seen bombing and shelling of our cities and towns, the reverberating effects of EWIPA have shaped countless Canadians. Many Canadians are Canadians strictly because they or their parents sought safety from bombing and shelling - whether it is was from Vietnam in the 1970s, Lebanon in the 1980s, the Balkans in the 1990s, Iraq and Afghanistan in the 2000s, Syria in the 2010s or the Ukrainians who are arriving today. The use of Explosive Weapons in Populated Areas has impacted hundreds of thousands of people who now call Canada home," said Paul Hannon, Executive Director of Mines Action Canada.

Explosive weapons were designed for use in open battlefields, and are often deadly choices when used in towns, cities and other areas in which civilians are concentrated.

“Heavy explosive weapons, which are inaccurate, have a wide blast or fragmentation radius, or are delivered in groups, are a deadly choice for civilians”, said Steve Goose from Human Rights Watch. “Use of explosive weapons with such wide area effects should always be avoided in populated areas.”

The text of the Declaration was finalised at the United Nations in Geneva on 17 June 2022, through a diplomatic process led by the government of Ireland.

States that sign the declaration must move quickly to begin the process of implementation. This includes developing policies and practices which limit the use of explosive weapons in populated areas and ensure that the protection of civilians is prioritized in the planning and conduct of military operations.