In Mine Action Every Day Should Be International Women's Day

Mine action is and should be everybody’s concern – and for very obvious reasons. The effects of landmines are felt by men, women and children in different ways, but all are affected and so the solutions to end this problem should be sought and supported by all. Unfortunately, women remain under represented in this field of work. Discussions on the subject are normally dominated by men with little representation from women (unless it’s a discussion about women’s involvement or gender equality but that’s a discussion for another day); when it comes to women’s involvement, a lot still needs to be done to ensure that they, like men, are permitted to add a meaningful voice to inform policy, actions and decisions.

Mines Action Canada has worked since 1998 to train, mentor and empower youth to address the impacts of inhumane and indiscriminate weapons. The Mine Action Fellows Program, started by MAC in 2018, has 45 youth from 25 countries enrolled so far. These are young people who are interested in or are already involved with civil society organizations working in mine action. The 2018 and 2019 cohorts focused on young women and deliberately so, to increase female involvement in mine action. This program brings to life a famous slogan, “Nothing about us without us” originally coined in Latin as; nihil de nobis, sine nobis. Each year the Mine Action Fellows have an in-person assembly at a forum organized to run alongside a global diplomatic meeting that brings together various stakeholders in mine action, including governments and civil society organizations. During the forum the youth undergo various training in topics relevant to their role as youth leaders; they also witness the major international diplomatic meeting in action; as well as meet and learn from fellow campaigners from around the world.

Last year the Mine Action Fellow’s Forum that was held from November 24 to November 29 in Oslo, Norway was attended by 32 female youth from 13 different countries. Among them were three landmine survivors and 22 were from landmine affected countries. Having survivors at this forum was important for us because they hold the lived experience of the harmful effects of landmines and their stories are such a powerful force to compliment all the statistics and data collected and shared to inform policy and decisions. Landmine survivors are truly experts in landmines. The forum took place alongside the 4th Review Conference of the Mine Ban Treaty. The Review Conference is a formal diplomatic meeting of all states parties to the Mine Ban Treaty that reviews progress made in achieving the treaty obligations and set an action plan for the next five years. These young women were exposed to formal plenary discussions and after some basic training in lobbying, they also got an opportunity to speak with governments that had not yet submitted their annual Article 7 transparency reports and encouraged them to do so. It was interesting to see these young women confidently and in certain instances persistently take on governments and ask them to account for their Article 7 reports. The assertive manner with which they did this could not go unnoticed – they sure did make MAC proud. What I saw in these youth was the future of Mine Action in good hands. 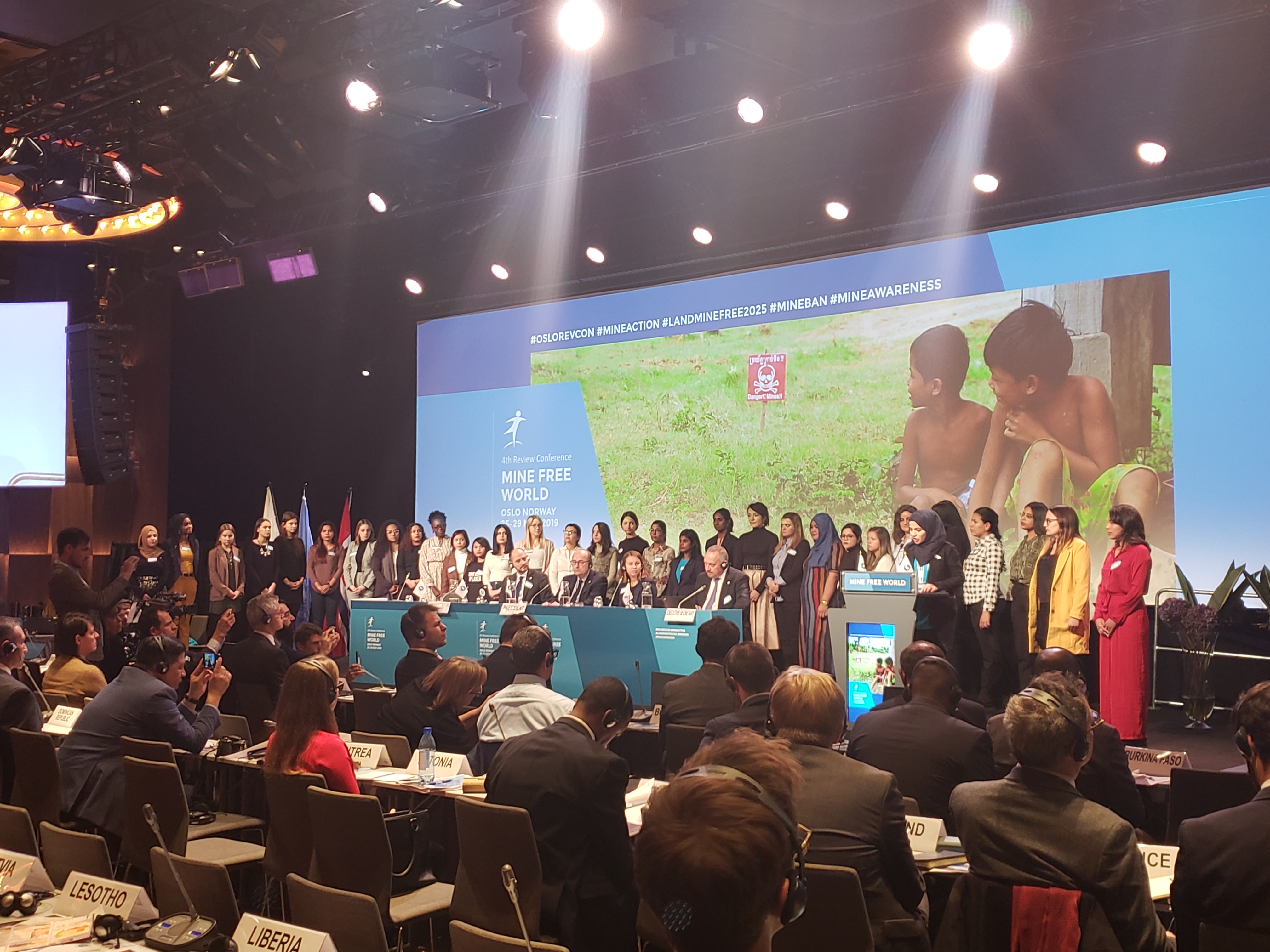 During this time the youth also drafted and presented a statement to the conference delegates, in which they called for increased resources, political will and concrete support by all states parties to finish the job by 2025. They were very clear about having the job done by 2025, and in their call to get this done they stated very boldly; “Our generation is ready to help finish the job on landmines, but in many of our countries we still need your support. We cannot wait forever so we are giving you only 5 (more) years”.  The youth statement was the highlight of the Forum and for many, the Review Conference as well. The conference ended on a high with this powerful statement which was read out by four of the young women, each taking a part in one of the UN languages, namely English, French, Arabic and Spanish.

From this unforgettable experience for those involved, MAC sent a strong message to the world; that you cannot leave out such an important group when you discuss something that affects the communities they live in. Young women should be involved at every level of mine action because just as the problem affects them, they should also be part of the solution. And because this year’s theme for International women’s day, Each for Equal is about collective individualism, we believe that each of the young women who represented their community at the conference went back to add their voice and effort to the field for a bigger impact as they clearly put it in their statement:

“Each of us present here is proof that if there is a strong commitment to a better world, whatever language you speak, whatever country you come from, by uniting your strengths you will be able to achieve your goals” 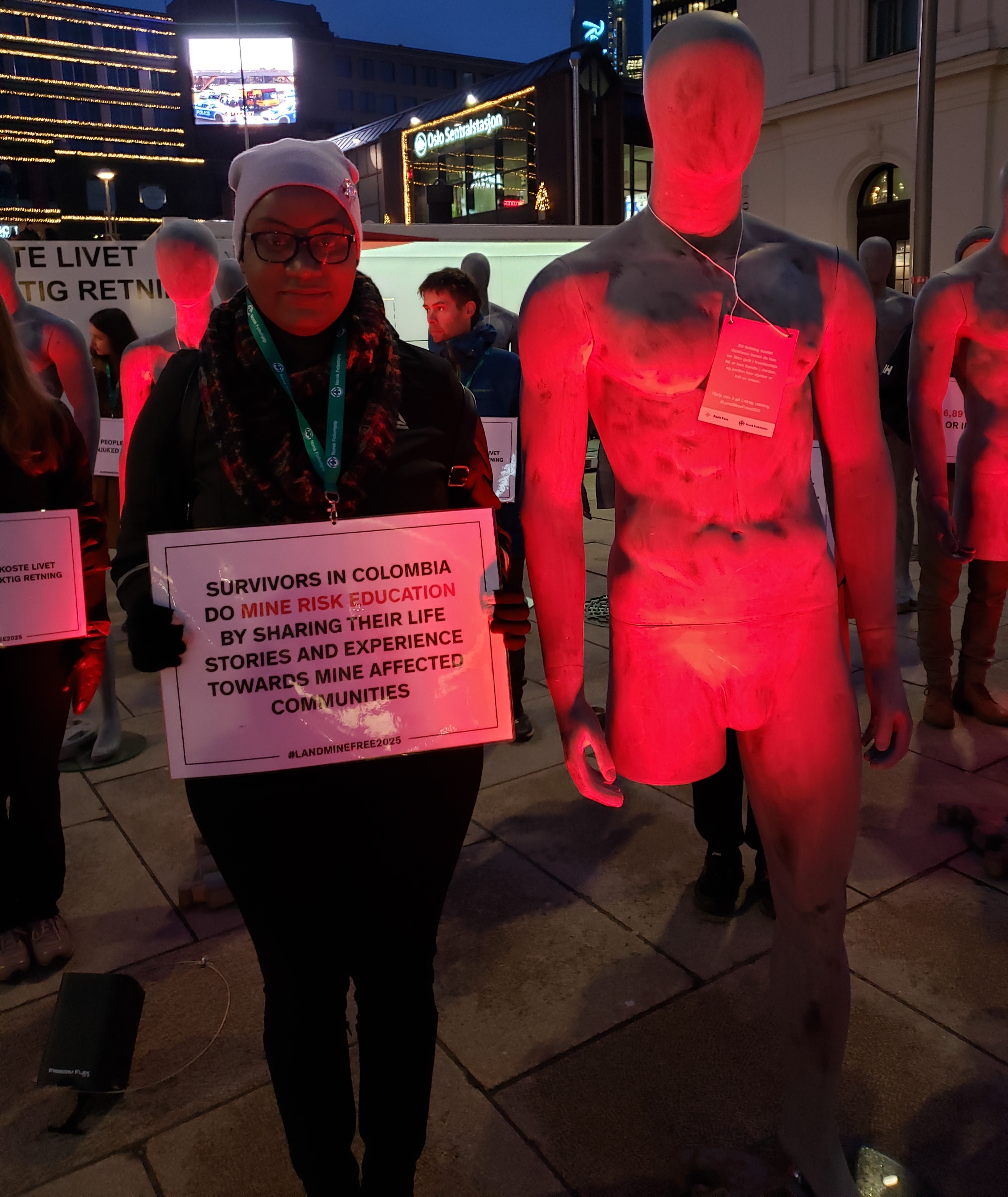