CCW from a distance

Delivered to the Convention on Conventional Weapons' Group of Governmental Experts on Lethal Autonomous Weapons Systems by Executive Director, Paul Hannon, from our office in Ottawa via the online platform Interprefy.

Thank you Chair and thank you to Germany and the ODA for their support in permitting remote participation. I would like to acknowledge that I am speaking to you today from the traditional and unceded territory of the Algonquin people. Recognizing the indigenous nations upon whose land we are working is an excellent reminder of the need to ensure that these discussions are inclusive and grounded in humanity.

As a member of the Campaign to Stop Killer Robots, Mines Action Canada encourages the high contracting parties to ensure that CCW continues to draw on the expertise from civil society and the private sector. Civil society and the private sector have made significant contributions to the discussion since the beginning and High Contracting Parties have frequently commented including today on the importance of contributions from civil society. Our role should be safeguarded in any future work streams to ensure that all these discussions are inclusive.

To keep our conversations grounded in humanity, we recommend adding in a work stream on moral or ethical concerns. A technocratic debate is insufficient to deal with the challenges posed by autonomous weapons systems. We need to be able to answer questions like “how can one test the humanity of an algorithm?” or “what is the relationship between explainablity and ethics?” Explainablity should never be considered as a synonym for ethical. 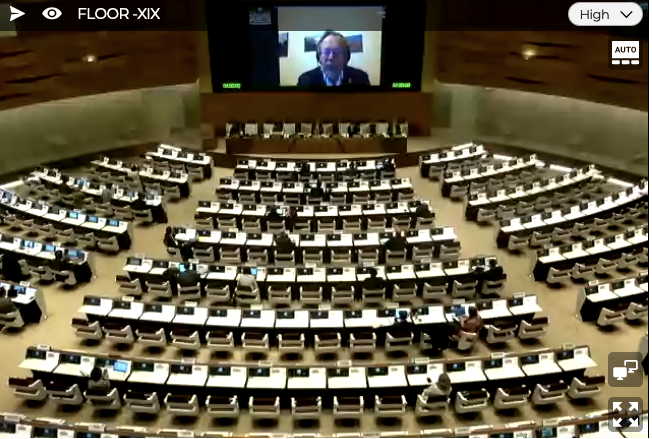 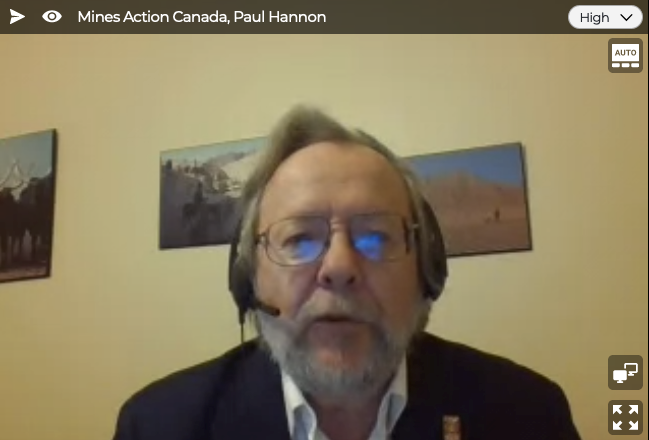 We are pleased to hear many delegations express a desire to move on from a discussion of definitions and characteristics because we note that CCW Protocol IV does not have a definition of a blinding laser weapon. It prohibits “laser weapons specifically designed, as their sole combat function or as one of their combat functions, to cause permanent blindness to unenhanced vision, that is to the naked eye or to the eye with corrective eyesight devices.” and while there is a definition of permanent blindness in Article 4 there is no definition of laser weapon in the Protocol. That lack of a definition obviously did not prevent negotiations nor stop it from being an effective Protocol.

We appreciate the robust debate this week and would like to direct specific attention to Austria’s comments outlining the needs to show that this GGE is not an isolated diplomatic silo. The work here must reflect the situation outside of CCW where scientists, experts and industry are calling for action, where the public wants to prohibit autonomous weapons, and where political leaders are stepping up. Ambitious guidance at the political level such as the mandate letter for Canada’s Minister of Foreign Affairs which instructs him to “Advance international efforts to ban the development and use of fully autonomous weapons systems” are not being matched by ambition in the CCW.

New international law is needed to address the multitude of concerns with autonomous weapon systems. It is time to negotiate another legally binding instrument, either here or elsewhere. That instrument should include:

Mines Action Canada appreciates the guiding questions put forward by the chair in his non-paper and we would like to present some additional questions for delegates to consider today and in future meetings:

We do not want to be the people who let the world sleepwalk into another humanitarian crisis. It is time for ambition and for taking the next step.