The CCW Must Make a Decision

Here is his statement:

Thank you Chair. Mines Action Canada is pleased to take the floor as a member of the Campaign to Stop Killer Robots and as MAC’s military advisor, I would like to share a few comments on this topic.

A few months ago, I did a television interview in which I was asked “why are you, as an ex-military person, advocating for a ban on Killer Robots?” Indeed, many of you might be surprised to see an ex-military officer who served for more than 30 years including quite a few years here at CCW and in other disarmament forums in this seat.

“Ex-military” means to me a human being trained and formed under military ethical and moral standards with a genuine respect for International Humanitarian Law and civilian lives. Military personnel who have experienced combat situations understand and appreciate the need for human judgement and values in conflict. With that perspective, abrogating life and death decisions to a machine is morally, militarily ethically and legally unacceptable. 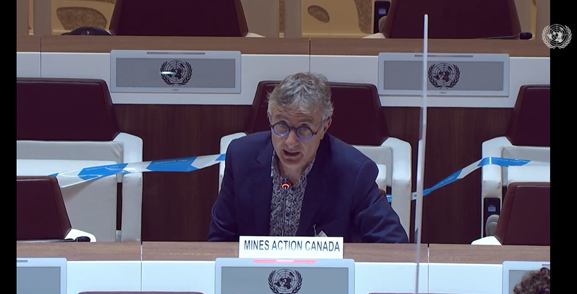 Mines Action Canada and the Campaign to Stop Killer Robots are currently reaching out to veterans and finding strong support for an open letter calling for a ban on autonomous weapons because quote: “the decision to kill (by a robot) would not be the result of the skills, knowledge, intelligence, training, experience, humanity, morality, situational awareness and understanding the laws of war and international humanitarian law that men and women in uniform use to make such decision in battle” unquote. This support echoes the public opinion polls which have shown the public wants action here to ban autonomous weapons systems with high levels of support among veterans and military families.

As MAC has said before, these discussions about autonomous weapons systems seem to underestimate the skills, knowledge, intelligence, training, experience, morality, and humanity that men and women in uniform combine with situational awareness and IHL to make decisions during conflict. The Campaign works closely with roboticists, engineers, and technical experts and despite their expertise and the high quality of their work, we do not believe an algorithm could replicate this complex human decision-making process.

We know that technology can help save lives and prevent unnecessary suffering but there is a line that should never not be crossed. We must begin negotiations to prohibit autonomous weapons systems that cannot be used with meaningful human control.

The Chemical Weapons Convention is a clear example of the international community’s ability to prohibit indiscriminate and inhumane weapons while promoting scientific advancement for peaceful use of new technologies.