(Geneva, 29 August 2019) – As the treaty banning cluster munitions nears its ten-year anniversary since entering into force in 2010, it remains an effective agreement that is making the world safer, according to the Cluster Munition Monitor, an annual monitoring report released today by the Cluster Munition Coalition.

“As more countries join the Convention on Cluster Munitions and take measures to end the threat cluster munitions pose, we are progressing toward a world free of these inhumane weapons” said Hector Guerra, director of the Cluster Munition Coalition (CMC). “Syria must immediately stop using cluster munitions and Russia must refrain from being complicit in this use, and all countries should commit to addressing the harm caused by these nefarious weapons."

For the first time since 2015, the Monitor did not report new use of cluster munitions in Yemen in the year prior to its publication.

It also found that in Syria the number of reported cluster munition attacks has decreased since mid-2017 as government forces have regained areas previously held by non-state armed groups. In 2018, 80 cluster munition casualties were recorded in the country, the lowest annual figure since use resumed there in 2012. The report warns that the actual number of casualties and instances of use are likely far higher as access to Syria is limited and many activities go unrecorded.

Cluster Munition Monitor 2019 reports that three countries have ratified the treaty in the past year—the Gambia, Namibia, and the Philippines—bringing the total number of States Parties to 106.

“The stigma against cluster munitions is growing stronger by the day, as shown by the dedicated work to destroy stocks, clear remnants, and ensure the ban convention is functioning effectively,” said Mary Wareham of Human Rights Watch, ban policy editor of Cluster Munition Monitor 2019. "States that have not joined this convention should reconsider that position and take steps to accede without delay.”

The annual report also finds that States Parties to the convention have already destroyed 99% of their stockpiled cluster munitions, eliminating a collective total of nearly 1.5 million cluster munitions and more than 178 million submunitions. Since the last edition of Cluster Munition Monitor was published in August 2018, Botswana and Switzerland completed destruction of their stockpiles. Guinea-Bissau, however, did not meet its stockpile destruction deadline of 1 May 2019—the first time a state has violated the treaty's eightyear stockpile destruction deadline.

In total, Cluster Munition Monitor 2019 identified at least 149 new cluster munition casualties globally in 2018, a continuation of the significant decrease compared to the annual total of 971 in 2016 and 289 in 2017. While all the casualties recorded due to attacks occurred in Syria (65) in 2018, Yemen had the most recorded casualties due to cluster munition remnants (31), surpassing the annual remnants casualties reported for Syria (15) or Lao PDR (21) for the first time. Casualties related to remnants from earlier conflicts were also recorded in Afghanistan, Iraq, Lebanon, South Sudan, Ukraine, and Nagorno-Karabakh. Civilians accounted for 99% of all casualties whose status was recorded in 2018, consistent with statistics on cluster munition casualties for all time, and due to the indiscriminate and inhumane nature of the weapon. 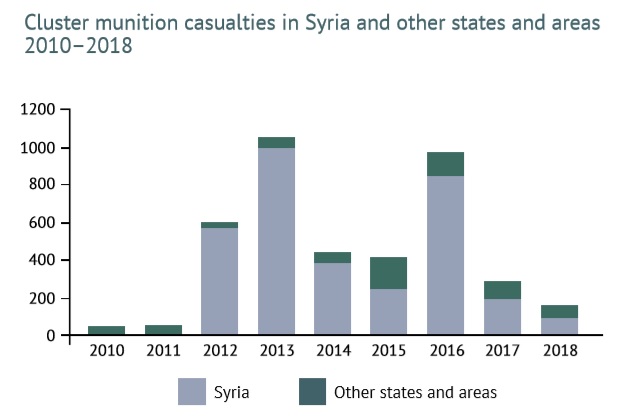 "Our reporting demonstrates clearly that each year nearly all victims of cluster munitions are civilians, with children accounting for more than half of the casualties reported in 2018 due to the explosion of deadly remnant submunitions,” said Loren Persi, casualties and victim assistance editor of Cluster Munition Monitor 2019. “States and the international community need to urgently prioritize assistance and increase resources in order to better address the needs of cluster munition survivors, their families and communities."

States Parties with cluster munition victims have obligations to provide adequate assistance and these provisions have improved the situation for victims since the convention was adopted. Significant challenges remain, however. In the last year, for example, declines in funding for community-based work has left local organizations struggling to maintain their operations. As a result some victims in affected states were not able to reach, or access, vital services.

Cluster munitions are fired by artillery and rockets or dropped by aircraft, and open in the air to release multiple smaller bomblets or submunitions over an area the size of a football field. Submunitions often fail to explode on initial impact, leaving dangerous remnants that pose the same danger as landmines until cleared and destroyed. The Convention on Cluster Munitions was adopted and opened for signature in 2008, and entered into force on 1 August 2010. It comprehensively prohibits cluster munitions, requires destruction of
stockpiles within eight years, clearance of areas contaminated by cluster munition remnants within 10 years, and the provision of assistance for victims of the weapon.