Others' refusal no reason not to ban nukes

For Canadians working on nuclear disarmament, the CBC headline “Anti-nuclear weapon effort to be spearheaded by Canada's UN ambassador” appeared to give a reason to be hopeful.

Unfortunately any hope provided by the headline quickly evaporated when the reader realized that the anti-nuclear weapon effort discussed was not one of these exciting developments towards a ban on nuclear weapons. In fact, the article goes on to say:

“Another memo to Trudeau stresses that Canada views progress to a total ban on nuclear weapons — the yet unattainable Nuclear Weapons Convention — to be "not politically feasible" because some of the states that have those weapons refuse to negotiate.”

Not only is this sentence disappointing, it is also untrue and the Canadian government should know that better than anyone. To say that a ban on nuclear weapons is “not politically feasible” because some possessor states won’t negotiate overlooks our own history.  Twenty years ago, Canada led an international process to ban an indiscriminate weapon despite the fact that some of the states that had those weapons refused to negotiate. That weapon was anti-personnel landmine and the Ottawa Treaty has resulted in huge declines in annual casualties, tens of millions of stockpiled landmines being destroyed and in entire countries being cleared of these lethal barriers to development. We, at Mines Action Canada, constantly see the impact of this treaty even though a few states that have landmines remain outside it. 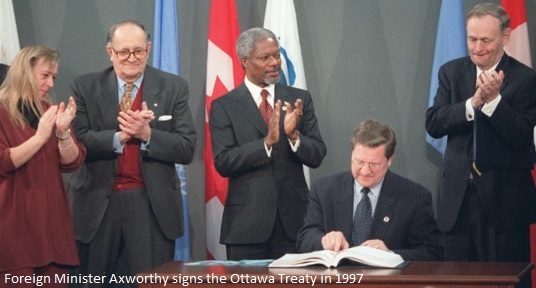 Since the treaty was signed in Ottawa, states that originally refused to participate have joined and the norm against landmines has grown stronger. The vast majority of states that still remain outside the treaty abide by the norm created and the spirit of the Ottawa Treaty.  With enough states participating, the norm created by a ban treaty becomes hard to ignore and the norm against landmines started with fewer states than have currently pledged to close the legal gap for the prohibition of nuclear weapons.

Canada needs to learn from its own landmine experience and take on a leadership role in banning nuclear weapons with whoever will negotiate. With nuclear armed states modernizing their arsenals rather than moving towards disarmament, it is time for responsible states to lead the way. We have done it once, it’s time to do it again