Stepping back in the spotlight

In December it will have been 20 years since the world came to Canada to sign the Ottawa Treaty banning landmines. The Ottawa Treaty is a success in progress with a huge amount of land cleared of landmines, a significant decrease in the number of casualties, millions of stockpiled mines destroyed and 80% of the world belonging to the treaty. However, there is still work to do – 64 states and other areas are contaminated by landmines and other explosive remnants of war and there were over 6,400 casualties in 2015.

The States Parties to the Ottawa Treaty including Canada have set a goal to finish the job by 2025. This goal is ambitious but achievable with political will and consistent funding.

As a State Party to the Ottawa Treaty with the means to do so, Canada has an obligation to provide assistance to landmine affected states to implement the treaty under Article 6 of the Treaty. At the moment, Canada has not been meeting this obligation to a level expected of the home of the treaty and a global leader on peace and human rights.

With the contribution of $17.55 million Canadian, Canada is the 9th highest donor to mine action in 2016. 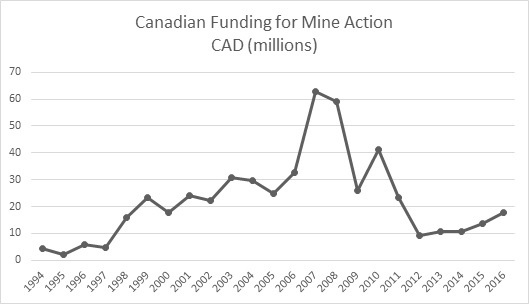 There are five pillars of mine action: victim assistance, mine clearance, stockpile destruction, risk education and advocacy. Canada’s 2016 funding was concentrated on one of these pillars – mine clearance. Some funded projects included risk education alongside the clearance operations. The only funding to include victim assistance and advocacy was the $8,000,000 CDN to the United Nations Mine Action Service (UNMAS) in Afghanistan. The description of this project listed all aspects of UNMAS’ work so it difficult to ascertain how much of the Canadian funding went to each pillar of mine action specifically.

Gaps in Canada’s support for the Ottawa Treaty

Canada’s support for the Ottawa Treaty currently has a number of gaps that leave some members of the international community questioning Canada’s recent commitment to its greatest contribution to global peace and security in the past 50 years.

Canada has not been very active on the Ottawa Treaty diplomatically in recent years. There has been a slight increase in engagement since early 2015 however, in general, there is little evidence that Canada has been speaking out on the issue publically or privately.

Canada’s funding support for the Ottawa Treaty, as it is currently implemented, contains large geographic gaps. Structural barriers have made it almost impossible for Canada to assist key states in dire need of support to meet their goals under the Ottawa Treaty, for example, Angola, Cambodia and the Democratic Republic of the Congo. These barriers also prevent Canada from assisting other states with heavy contamination such as Vietnam. If a state is not one of Canada’s development target countries or a state in need of stabilization, it is unlikely that Canada will be able to provide mine action assistance regardless of the need or our treaty commitment. The new Feminist International Assistance Policy is supposed to end the Countries of Focus program. However, the lack of details on how such a change will be implemented raises questions about how effective the new policy will be in closing geographic gaps in Canada’s support of mine action and the Ottawa Treaty. Indeed without specific recognition of how mine action meets Canada’s feminist foreign policy, connects to the SDGs, and addresses particular development needs of affected countries, it is not clear how removing the countries of focus approach will contribute to increased funding for the pillars of mine action.

As the table of data from Export Development Canada below indicates, all four of the countries mentioned above have business ties with Canada, as well as cultural ties, ensuring that support for mine action including clearance, victim assistance and advocacy in them would be of benefit to Canadians in addition to ensuring that Canada meets its obligations under the Ottawa Treaty.

During the 2015 election, the Liberal Party of Canada pledged that “A Liberal government will re-engage on this important treaty and lobby non-signatory states to join the treaty” when asked about the Ottawa Treaty. In order to truly re-engage with the Ottawa Treaty, Canada should:

Canada has the resources and the capacity to be a leader on landmines again by making a few small adjustments. The funds and the diplomatic resources required to make this re-engagement a reality are there, all that is needed is political will.  With Canadian leadership, it is possible to end the suffering caused by landmines by 2025.